Showing posts from October, 2008
Show all

By Grace Z. Abonillo - October 20, 2008
... pasaway na si kapatid........pasaway pa ang mga papampam sa multiply... i wish lang alam nya pinagsasabi nya.. OO panget ang takes ko.. OO panget ang Post Processing ko......am a phographer by heart.. what i took is nice for my eyes.. i love it..kahit pa sa tingin ng iba eh di mabuti... ...i post photos here unang una to stock..then to share.. and the last to have some critics within my contacts..networks..or friends... ...honestly, i got pissed and my pressur went up when i read one of the comment..what really got me mad was the fact that the comment was not even connected to photography, to the technicalities of the post processing.. it's not even dark that it can be considered gross......Jose told me,na sana me variation yung isang album ko, regarding the model's poses.. oo, at one point mali ako dun.. kasi parang same position lang.. yung mga ganung comment sana ang inaasahan ko... hindi yung ewan......ryan also commented about my lighting... hahaha pasaway ako eh.. ay…
39 comments
Read more 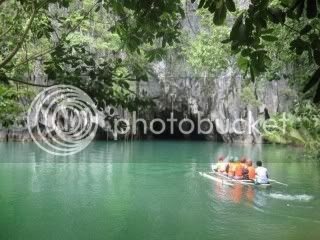 Subterranean River National Park, Puerto Princesa After dropping to the Top 20 last month, the Philippines’ four candidates for the New 7 Wonders of Nature are now showing a strong presence, landing on the top 11 in the live online ranking of 77 nominees from around the globe.
As of the latest count, Puerto Princesa Subterranean River National Park is at No. 1, Chocolate Hills of Bohol is at No. 4, closely followed by Tubbataha Reef at No. 5, and Mayon Volcano is at No. 11.
The New 7 Wonders of Nature is an ongoing campaign sponsored by the New 7 Wonders Foundation based in Switzerland. The same group initiated last year the New 7 Wonders of the World project, in which the seven new sites were officially chosen after a successful poll which posted 100 million international votes.
Chocolate Hills, Bohol “We are pleased with the current rankings. But as the finale draws near, we should be more persistent in urging Filipinos to vote and actively promote our candidates,” dsif Ace Durano, sec…
6 comments
Read more
More posts