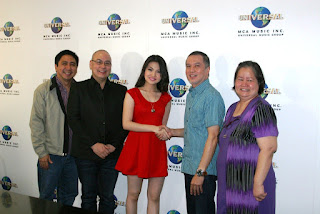 She is currently starring in the GMA drama-fantasy series “Paroa: Ang Kuwento ni Mariposa” where she plays the lead role Mariposa. This comes after the success of her TV series “Luna Blanca”.

Watch out for Barbie Forteza’s album which will be coming out soon. Expect surprises from this young star as she embarks on her another facet- singing.

“I am so honored to be part of MCA Music and I hope you will support my upcoming debut album the same way you supported me in my TV shows,” Barbie said.
Barbie Forteza Entertainment GMA Talent MCA Music Music Universal Records