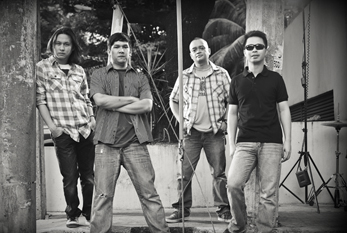 Pilipinas, Kailan Ka Magigising, penned by founding Rivermaya member Mark Escueta, is reminder to everyone to go against crab mentality, and selfishness, especially now that another elections is within the horizon once again.
When asked how the single was chosen among the tracks recorded for the forthcoming Panatang Makabanda album, drummer-turned-guitarist Mark quips, “In the early stages of recording, this song became the initial favorite of the group. It's also a fun song to play live. Maganda yung message ng kanta and very timely rin since election time nanaman tayo. “
The single will also have a music video, set to premiere soon, that highlights the fact that only a nation that thinks and acts as one can effectively employ change.
This release is also the band’s first project with their new label Universal Records, where they join the label’s elite roster of bands – Parokya Ni Edgar, Kamikazee, Sponge Cola, Calla Lily, among others.
“It's really a great honor for us, not only to become part of such a high-calibre roster, but to be given the chance to work with a company that has always championed the Filipino artist. It took a few weeks for it to really sink in. Di kami makapaniwala,” says Mark. “Finally, we're ‘home.’"
Stay in touch with Rivermaya through their Facebook page, Twitter and Instagram: @rivermayaband
and also check out the bands voice blogs on the Bubbly App for iOS or Android. Their official website is www.rivermaya.ph.
Mark Escueta OPM Pilipinas Kailan Ka Magigising Pinoy Music Rico Blanco Rivermaya