ILOILO, by Singaporean Filmmaker Anthony Chen that stars Angeli Bayani opens the celebration of the month of Overseas Filipinos last Dec 2, in a block screening held at Shangrila Mall’s Cineplex. Chen is present during the screening who is so happy to share all his experiences in a span of more than six months since the premier of his film. He said that it is an amazing journey that he himself is not that ready, but somehow he was overwhelmed how he touch many lives especially Filipino Migrant Workers whom he meet in different countries that Iloilo is being shown or in competition.  Chen  just came from a Film Festival in Tokyo, Japan wherein Iloilo won the Audience Choice Award. He only stay more than 48 hours in Manila and have to live for some other commitment, his film is this year’s entry of Singapore for Best Foreign Film in the prestige Oscar Award. Iloilo opens in Manila theaters since December 4.

Aside from OFW month, December 18  is International Migrants Day declared by United Nations and to commemorate it, a National Forum on Migration is set on that date in SSS Auditorium in Quezon City. Other line up Film showcase is the screening of the movie Dubai, Caregiver and Miss X in Cinematheque in  Baguio City on Dec 17 to 21.  The month long celebration is a joint effort of different Philippine Government agencies like Philippine Migrant Right Watch, Commission on Filipino Overseas and others. 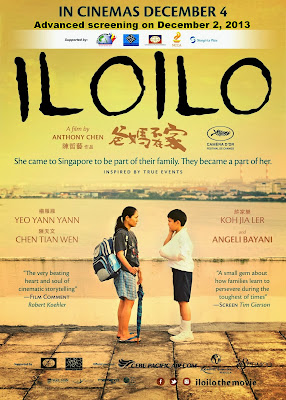