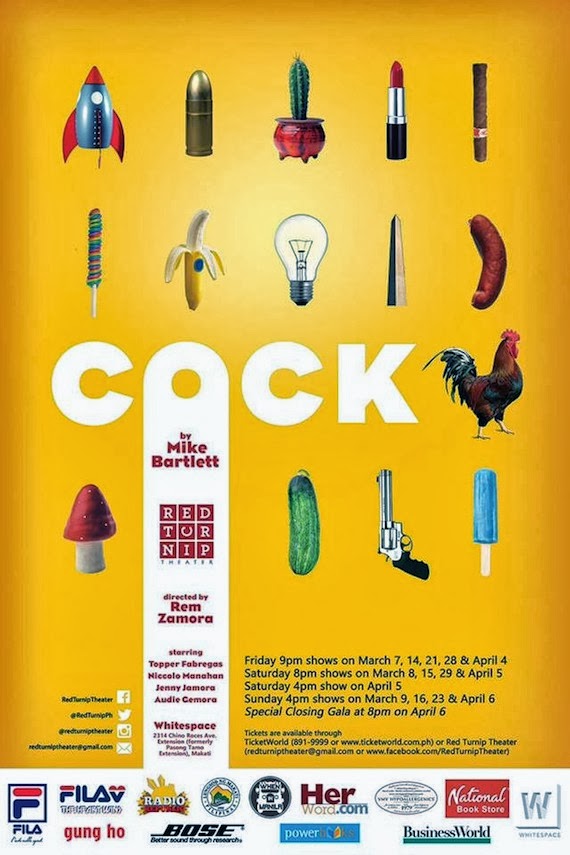 What happens when a young gay man falls in love with a woman? That’s the central conceit behind Red Turnip Theater’s second offering, COCK by Mike Bartlett. A sold-out hit when it first premiered in London in 2009 and subsequently during its off-Broadway run a year later, COCK revolves around a gay couple whose rocky relationship derails when one of them sleeps (and falls in love) with a woman. Debates over one’s sexual identity explode when all three decide to sit down and “duke it out” over dinner. Hilarity ensues when another unexpected guest turns up and loyalties are put to the test. As one character puts it, “It’s the ultimate bitch fight”.

The New York Times calls COCK “a terrific, tense little comedy” while The Huffington Post hails it as “a terrific contemporary play that puts much of other theatre to shame”. This critical darling is the perfect bookend to Red Turnip’s maiden season.

Fresh off the success of their critically-acclaimed CLOSER last October at Whitespace, Red Turnip promises another unique, in your face theatrical experience with COCK. The vision of five estab-lished actors (Ana Abad Santos, Topper Fabregas, Jenny Jamora, Cris Villonco and Rem Zamora), Red Turnip aims to engage theatergoers with the sort of material that seems to be in short supply in the country—the straight play.

Rem Zamora makes his directorial debut with COCK.“We’re excited to be back in Whitespace. A lot of people who came to CLOSER said they enjoyed the intimacy of the experience and the space. That was in Hall B. We’re going even more intimate this time in the smaller Hall A. COCK also plays in the round so it feels like you’re watching a fight in an arena—no frills: just words and pure conflict in the ring, and an intense involvement in the audience.”

Zamora has assembled a tight cast of theatrical heavyweights for COCK’s Manila premier: Topper Fabregas (Boeing Boeing, The Producers), Niccolo Manahan (Next Fall, Doubt), Jenny Jamora (Mind’s Eye, A Little Night Music), Audie Gemora (Sweeney Todd, Les Miserables) Fabregas is John, a young man caught between his gay lover and his growing attraction to an-other woman- W, played by Jamora.
Niccolo Manahan makes a theatrical comeback as M, John’s lover who isn’t about to let him go without a fight. “I feel ‘Cock’ will be a great experiment for me; an experiment in balancing my life with the things I enjoy doing, and an experiment in pushing my range. I don’t know where this ex-periment will lead but its an incredible opportunity that I’m thankful for.”

Rounding off this impressive cast is theatre stalwart Audie Gemora as F, M’s well-meaning father whose sudden appearance at dinner throws everyone for a loop. “The birth of a theater group is always exciting and eventful with fresh artistic vision and passion. I am thrilled to be part of Red Turnips 2nd offering, ‘Cock’. This is Rem Zamora's directorial debut and my first time to be acting opposite brilliant young actors Niccolo Manahan and Jenny Jamora, while Topper Fabregas takes on his most complex character yet. Together we jump into a crackling cock fight of personalities, emotions and words.”

COCK is a comedy… with bite. No props, scenery or furniture. Just actors, sharp dialogue and some clever staging. All essential. Absolutely Red Turnip.

COCK is supported by FILA through the kindness of its President and owner Cris Albert. Supporting the arts has become one of her numerous advocacies, a true testament to her gener-ous spirit and her commitment to giving back to the community.