By Grace Z. Abonillo - February 07, 2014
Known Comedian, artist and LimiTado store owner, (who knows how to play alesis sr16) also known as Arvin Jimenez in real life is confirmed dead today. Tado is one of the 14 passengers confirmed dead in the bus accident. 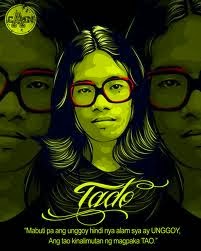 The bus Florida which came from the Sampaloc Terminal is bound for Benguet.

According to reports, fourteen people, among them local comedian Tado Jimenez, a Dutch woman and a Canadian man, were killed when a bus fell into a 500-meter-deep ravine on the outskirts of Bontoc, capital of Mountain Province, Friday morning, police said.
Ann Van de Ven, a tourist from The Netherlands, and Canadian Alex Loring were found dead at the crash site.

Comedian Tado Jimenez.
The two foreigners were among the nine people who were killed instantly when the bus fell into the ravine in Sitio Pagang at 7:20 a.m., said Senior Supt. Oliver Enmodias, Mountain Province police director.
Enmodias said another Dutch, Annenmik Veerwege, was among the 31 injured, including a 7-year-old child identified as Agung Sikam.  They were being treated at the Bontoc General Hospital.
The bus driver, Alexander Longadey, was also undergoing treatment.
Enmodias said the Florida Trans bus, which came from Sampaloc in Manila, was carrying 45 passengers.
Police identified some of the other fatalities as Marcial Bernard Jr., Andrew David Sicam, Natividad Ngawa, Gerald Baja, Ana Alaba, and Arvin Jimenez, also known in the entertainment world as Tado Jimenez.
Arvin "Tado" Jimenez LimiTado Tado