The wonder that only Nilo Cruz could do.

ONE of Philippine showbiz best kept secret is Nilo Cruz, a man behind those glamorous and box office stars before they face camera and its audiences nor TV, Print and even movies. Cruz is a professional commercial make-up artist whose main goal is to make the local celebrities look more beautiful on screen through the magic of his hands and his make-up. 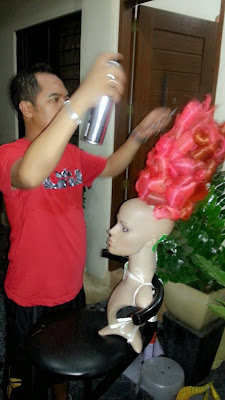 Cruz two decade  career start as a on call or even a stand-by singer in noon time show in ABS-CBN, he is a winner of DZMM Hamon sa Kampeon followed by Sang Linggo nAPO sila ‘Pop-Pinoyan.  After joining singing contest on TV he becomes the regular studio make up arist of then Masayang Tanghali Bayan host Mickey Ferriols.  He was notice here on how clean and fast he can do a make up to a star, and because of this he became an overnight sensation to stars especially for noon time host on TV looking for a good make-up artist.

During our interview, Nilo admit to us that he never had any formal background or study about applying make-up, the undergraduate of AB English in Jose Rizal University used to hang out in different parlor or salon of his friends, and by seriously observing he was able to learn and develop his own techniques, style and creative way of applaying make up, putting eyelashes, and even hair cut too.

“Ang kaibahan ko sa ibang make up artist siguro ako yung mahusay na sa make up at nag-gugupit pa, and siguro grabe lang ang creative  or imaginative mind ko”added Nilo.
Since his stint in noon time show of  ABS-CBN, Nilo a resident of Mandaluyong City become a mainstay in Make-Up Department and later was appointed as the Head of it from Sang Linggo nAPO sila up to Pilipinas Win Na Win. Nilo also start joining different cosmetic and beauty Make up Competition and was able to represent Philippines in an International Competition as well. He did well in those competitions and become one of in demand Make-Up artist of his generation. From TV to pageants, to billboard ads, Magazine cover, Theater play, concert, fashion show, TV Commercials shoot, wedding, debuts and he even venture into movies as prosthetic make-up artist. Among his works in Film are the Kung Fu Diva and Enteng Ng Ina Mo where he won Best Festival Make Up in Metro Manila Film Festival in 2011.

Through his talent and skill he was able to see the world, he venture in coordinating with Celebrities in doing show’s abroad in different states in US, Europe  and even in Middle East as long as there are Filipino Communities.

For inquiries you can contact Nilo through his email address nilo_cruz2001@yahoo.com