Palawan, a top destination in this year’s Philippine Travel Mart.


THE Last Frontier Province of Palawan is still the top destination and the bestselling product in the recently concluded Philippine Travel Mart last Sept 5 to 7 at SMX Convention Center in Pasay City. The 3 days exhibit who now turn 25 years old have a total of 245 exhibitors from all over the region in the country mostly tourism related products and establishment.  Thirty percent of it comes from Coron, El Nido and Puerto Princesa City mostly tour agencies, island resorts, hotels and local Tourism office.

Palawan delegates mostly offers cheap and lower tour packages and accommodations to the guests and buyers of this annual travel trade exposition, even Manila base Travel agencies offers exciting tour packages for Palawan.

Department of Tourism Regional Director for Region 4A & 4B Rebecca Labit said that Palawan still hold the title as the Jewel of the region because of its iconic destinations such as the underground river. Labit also announce that while having the travel mart her Marketing team is in Palawan with buyers from Europe, Australia, Thailand Vietnam and Canada.

She also emphasize that she is using photos of Underground river in all marketing campaigns they are doing here and abroad, most likely it will be a front runner for the upcoming ASEAN summit next year and for next year department campaign the “Visit Philippines 2015”.

Labit’s region is the featured destination in this year’s Travel Mart which is organizes by Philippine Tour Operators Association (PHILTOA).
Feud with Mayor Bayron.
Labit also clarify the issue with City Mayor LuciloBayron regarding the remarks she made about the tourist arrival in the City that figures tip down. She stand by it and saying she only doing her job, and as for her its non-issue anymore since its ages ago, however she admit that she is not in speaking terms with the Mayor due to her busy schedules as a Regional Directress. “I don’t blame them for feeding the Mayor the wrong information, but if they blame me nasinisiraankoang Puerto Princesa, I think I’m not that person to do that, anglakingpagodkosa Tourism ng City, close nasa akin yan, I’m just doing my job.”Labit said.

She also express support for Gov.Jose Alvarez statement declaring Balabac as the next Maldives, she said that truly it has a beautiful sea and its part of the super region of the past administration, but she suggest to improve more on the infrastructure in many destinations in the province to achieve such goals.

For nine months now after she assume the post in the Region, Labit said that she focuses on straightening the relationship between the Public and the private sector , continuous development of product and professionalizing standards and services in all Tourism establishment.  She is appealing to all Palawan base tourism product to accredit them with DOT so they can be updated with the latest and current trends in tourism industry.

Puerto Princesa goes Vibrant with Agriculture and Tourism.
Aileen Amurao, the City Tourism Officer claim that Puerto Princesa’s Tourism industry is so vibrant now a days, this is due to the lines of Cruise ship that visiting port of the City in the past and will be boom again this coming November up to 2015.

Amurao said that Bayron’s leadership is gearing up for Agri-Tourism that give chance to other Baranggay in the City that don’t offer any tourist spot, they will convert them as suppliers of foods for tourists that visits the City, organic farming is the one they encourage the most.

Amurao also reveal plans of his office to boost Tourism in the City in the coming months, this are putting  up floating cottages in Puerto Bay that offers a lot of activity, they are also reviving the sports tourism plans, and reviving heritage parks such as Eulalia Park, Rizal Park and the Plaza Cuartel.

On her nine months as well in the said office, Amurao said that she is working double time focusing on the follow ups for many infrastructure projects that need to be accomplish with in the year since majority of this is for the benefits of existing tourism destinations of the City.

In terms of tourist arrival, Amurao stress that under her leadership they don’t rely to it so much since its only figures, “I don’t really bump on tourist arrival, puedesyanggamitin for planning purposes , and mostly galling yansamga accommodation and hindinamanyanlahat tourist”,Amurao said.

The City Tourism office along with Provincial Tourism Office of Palawan is an active exhibitor of Travel mart way back then, the booth of the City this year features the jungle trail experience going to the famous underground river, it made it as a finalist this year in booth design contest.

PHILTOA is the organizer of Travel Mart is a non-stock and nonprofit organization of DOT accredited tour operators and allied members actively involved in the advocacy of responsible tourism.  Membership includes tour operators, hotel, resorts, transportation companies, handicraft stores and other tourism  oriented establishment and associations. 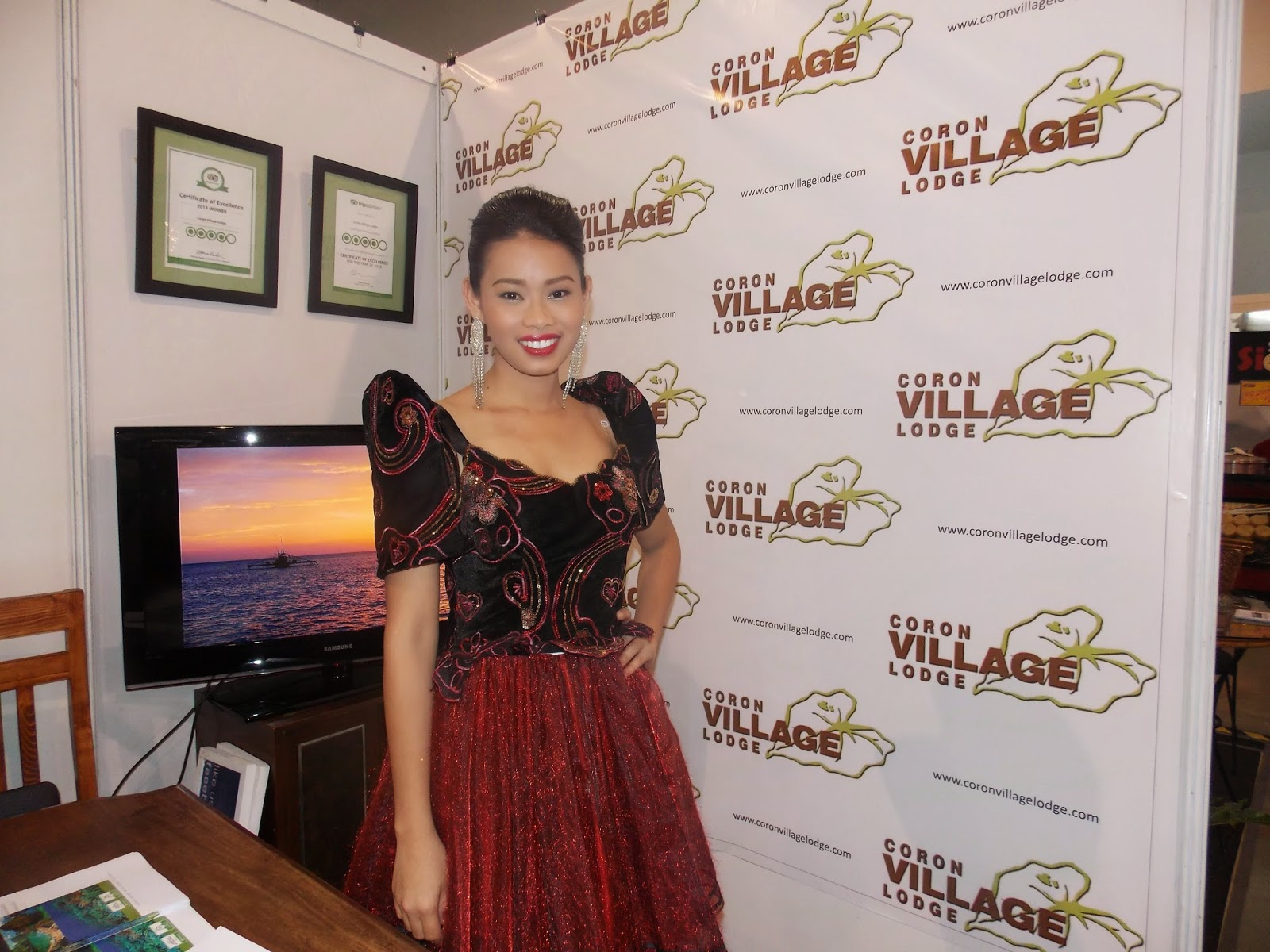 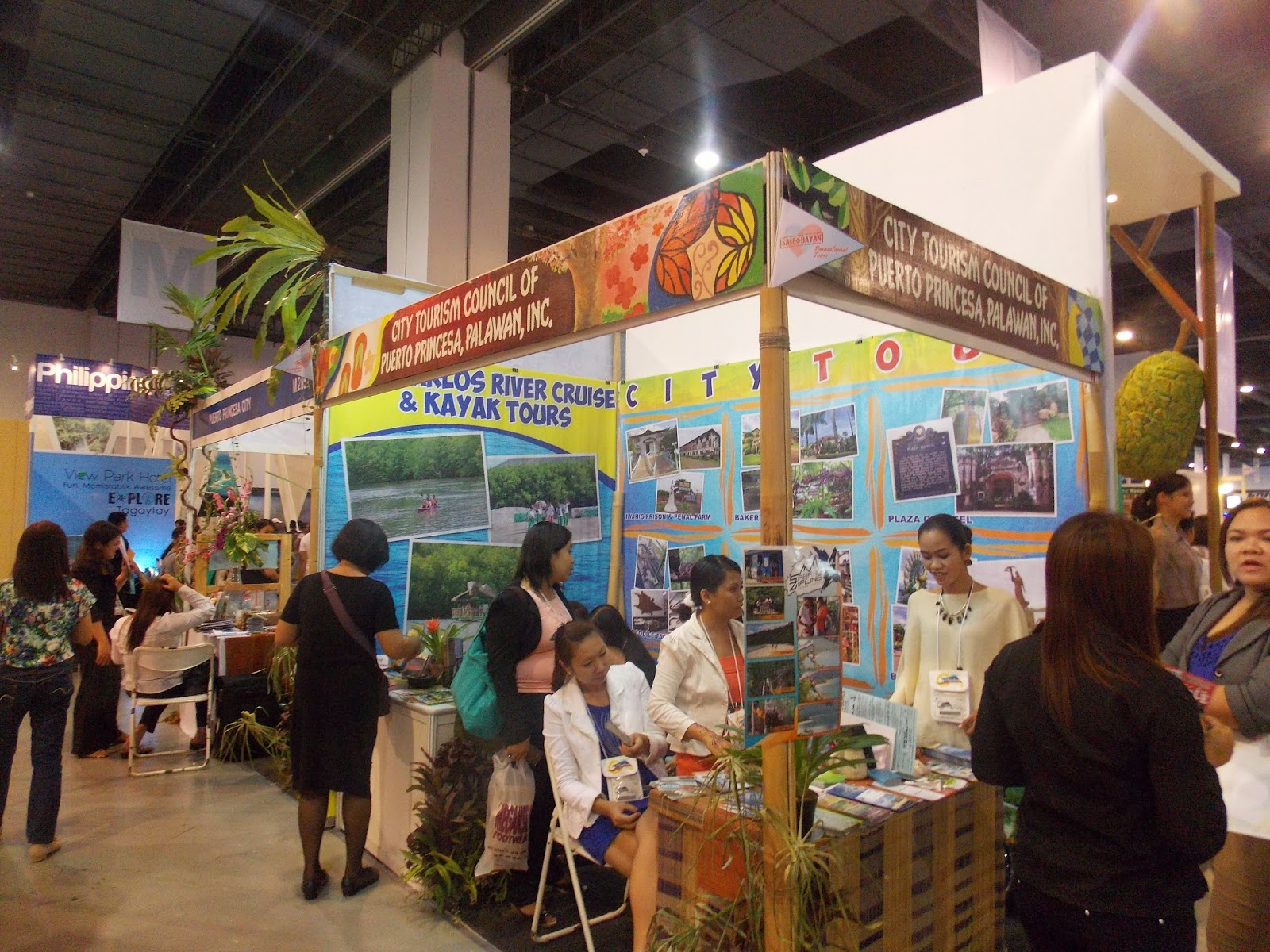 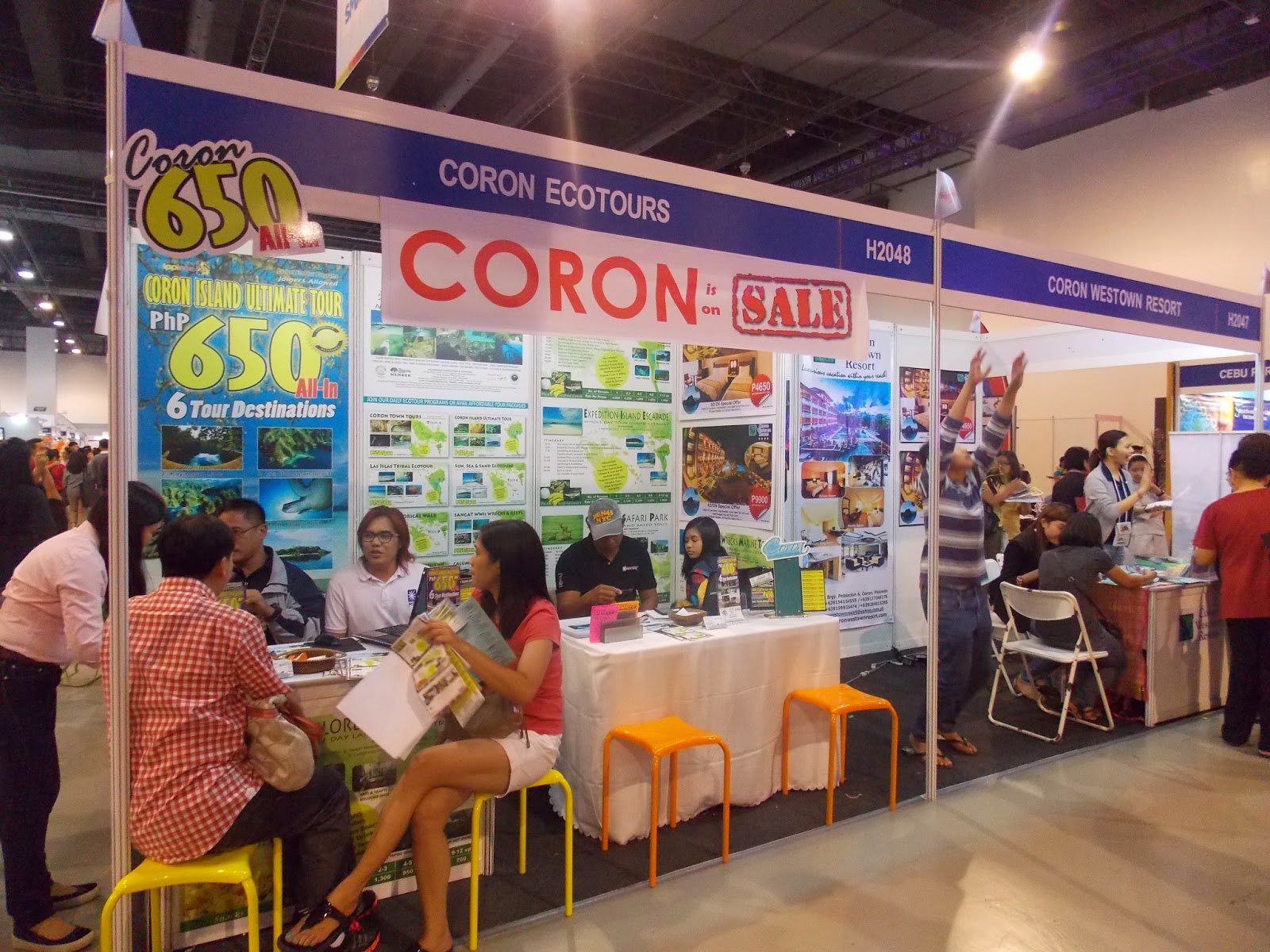 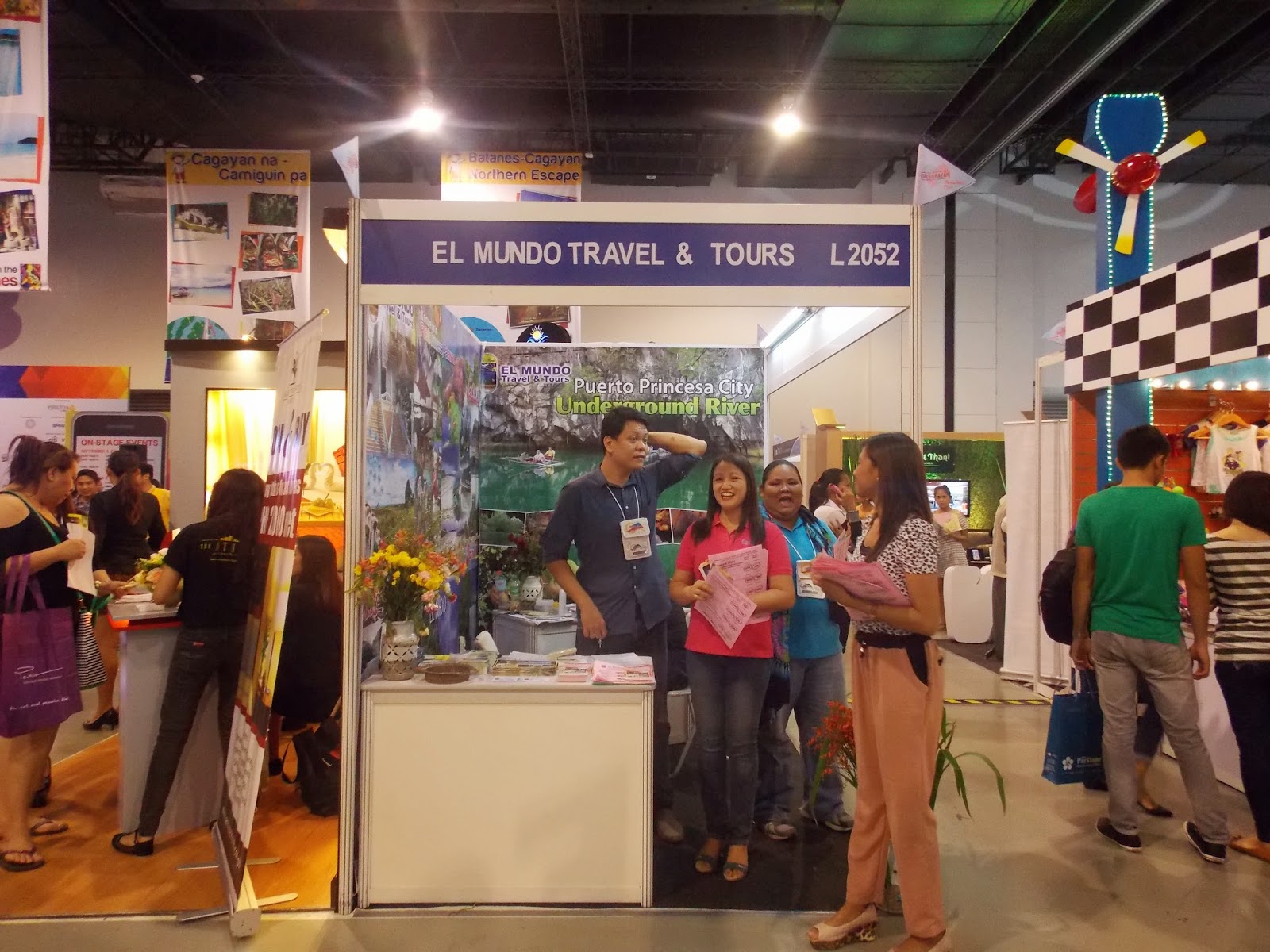 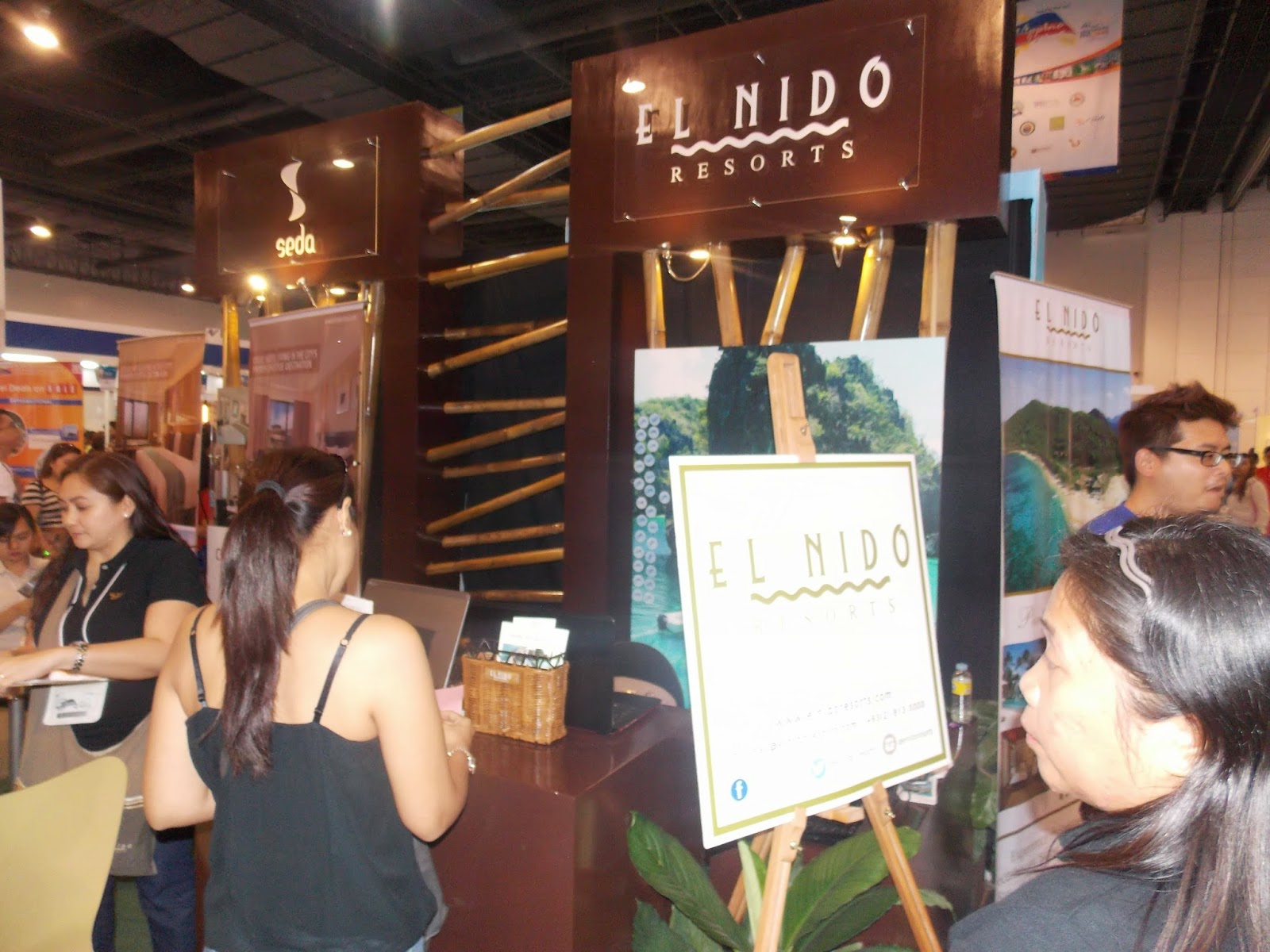 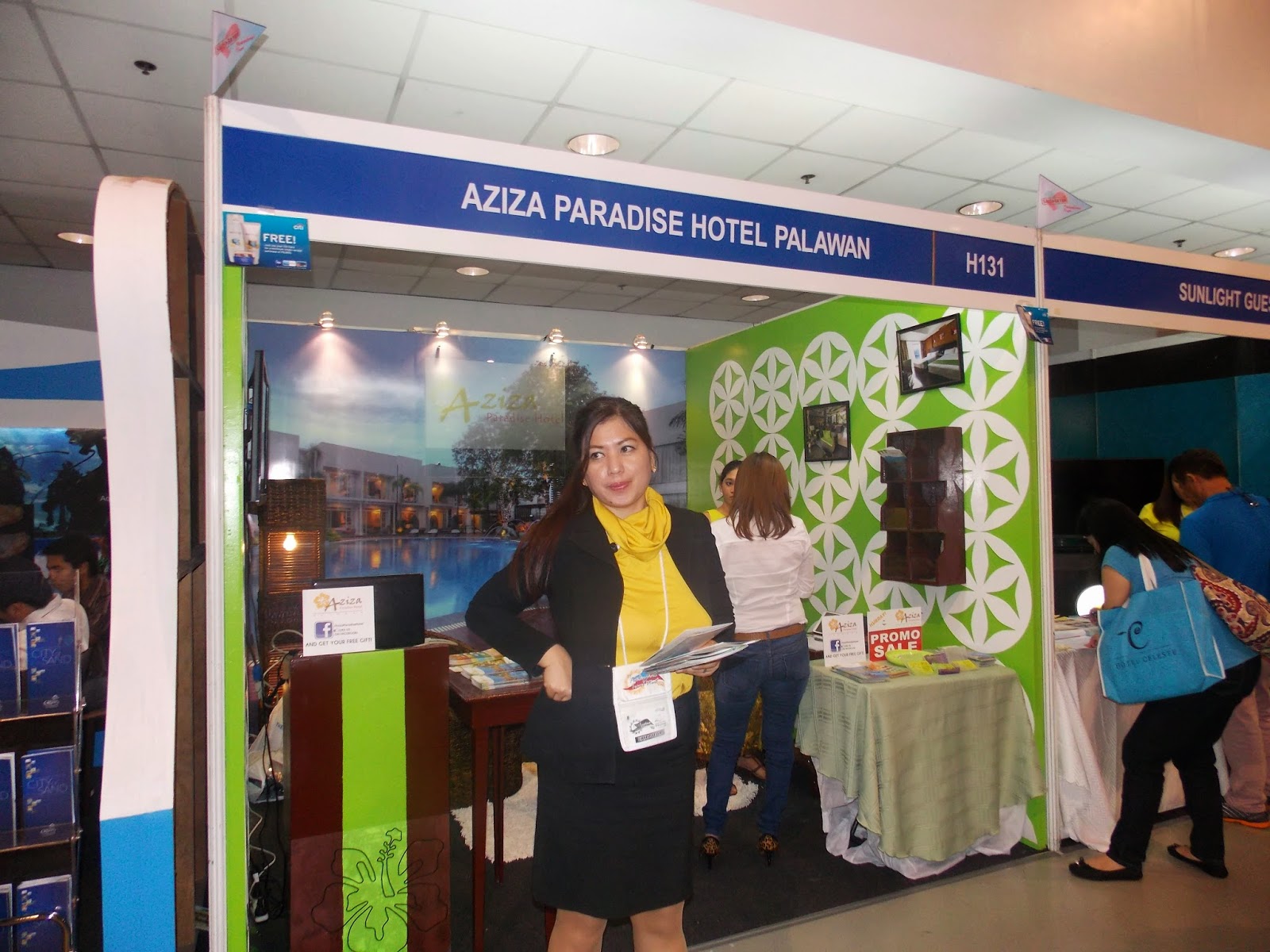 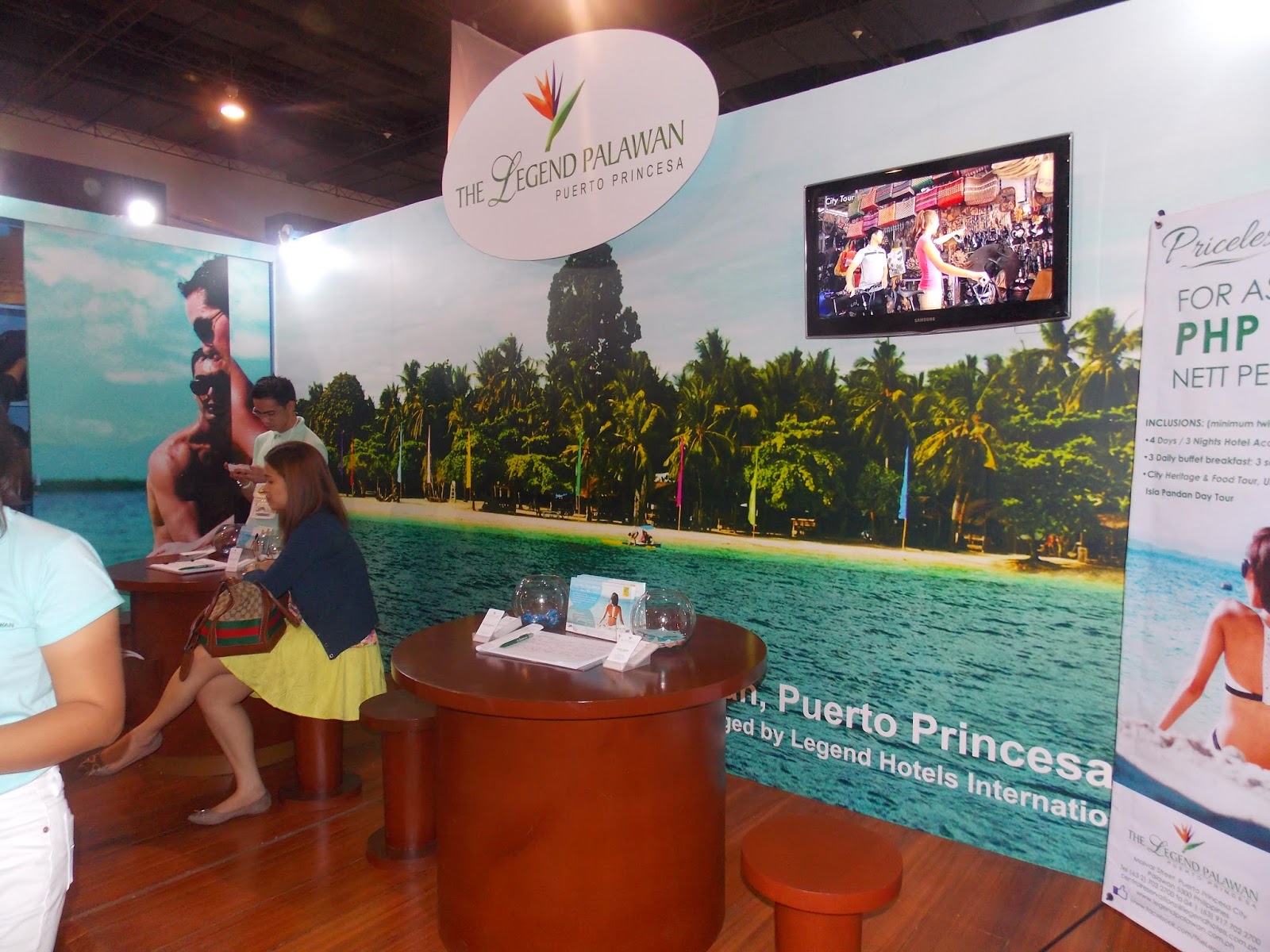 ceemee said…
Palawan's underground river is a place I hope I could visit one day. More inexpensive travel packages do encourage local and foreign tourists to travel to palawan and other parts of the Philippines.
September 12, 2014 at 11:33 AM

Franc said…
I've been to Coron and Puerto Pricesa and I am amazed at how amazing their Marine Life. Palawan is also really clean and safe for tourist.
September 12, 2014 at 5:39 PM

The AnnMarie John said…
I've never been to that part of the world before and it looks beautiful from what I see here. Tourism plays such a big part in most countries and I'm sure it does there as well.
September 12, 2014 at 9:10 PM

Unknown said…
Sounds like a great destination.. I never heard of it before, but maybe its something to look further into for the future..
September 13, 2014 at 1:38 AM

XmasDolly said…
I love love the pictures. Thanks so much for sharing. I doubt if I'll ever get to travel to your part of the world, but it's fun to look at all the great pictures.
September 13, 2014 at 5:02 AM

Unknown said…
This looks like a lot of fun despite the infighting. I have only passed through the Philippines Airport on my way to Singapore. I may have to make this a destination.
September 13, 2014 at 5:59 AM

Bonnie G said…
I love when others show pictures of places I have never been. It's really nice to see something new.
September 13, 2014 at 8:15 AM

Rebecca Swenor said…
This looks gorgeous for sure and a great destination. I would love to visit here some day. Thanks for sharing.
September 13, 2014 at 1:35 PM

Edel San said…
Palawan is included in my places to visit here in the Philippines. I'd love to visit the undeveloped islands though :)
September 13, 2014 at 3:27 PM

Unknown said…
I have to say, I have never been to the Philippines and now all I want to do is visit the underground river in Palawan. I need to same my money so I can go. Thanks for the write up!
September 13, 2014 at 10:54 PM

Sweepster said…
i hope to visit there one day. Palawan sounds so interesting!
September 15, 2014 at 5:36 AM

Mommy Bloggers Philippines said…
I'm afraid of adventure trips but I dream of the famous underground river in Palawan. Don't be a stranger daw in your own country so I'm putting that in my bucket list :-)
September 15, 2014 at 6:52 AM

Unknown said…
I love that Palawan's still so active in promoting their region despite their global popularity! I haven't been there but I hope I'll be able to visit the place soon!
September 15, 2014 at 8:35 AM

Unknown said…
I've always wanted to go to Palawan but it has never been push through because of a lot of things! Hopefully one day I could go there together with my family-- my husband, my kids! :)
September 15, 2014 at 8:44 AM

The Clueless Mom said…
My husband and I got the chance to visit Palawan a few years ago, We got to see the Underground River. Hopefully next year, we can visit Coron - I hear it's such a beautiful place!
September 16, 2014 at 4:37 AM

Mommy Levy said…
Palawan is one of the places here in the Philippines that I wish to visit soon.
September 16, 2014 at 4:52 PM

Lei said…
We plan to go there next year for our 15th year wedding anniversarry!! I am now looking for great deals in Airlines and Hotels and Tours.
September 16, 2014 at 5:30 PM