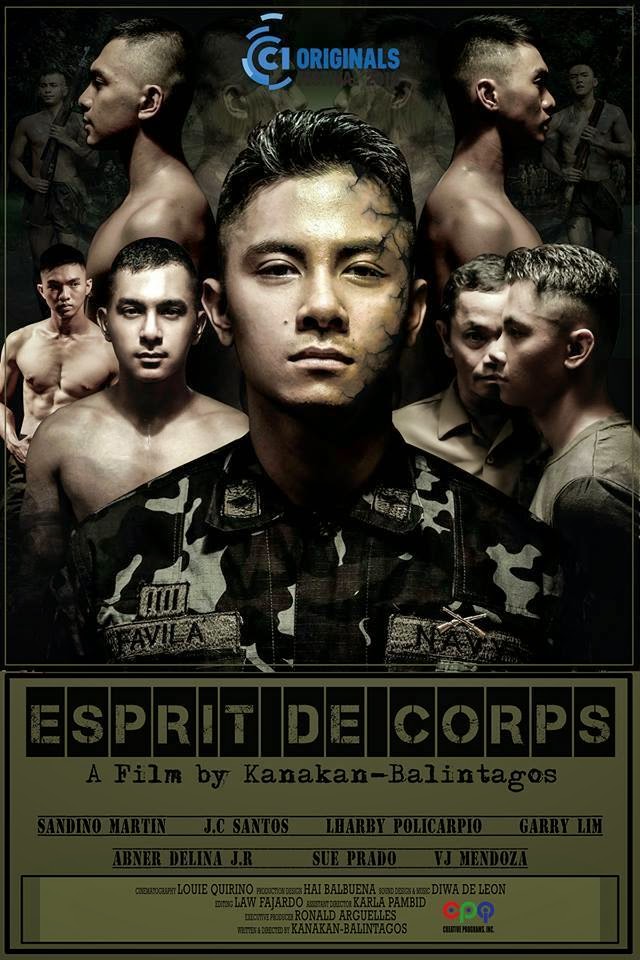 "What is 'esprit de corps'?" and "What is a 'kiss'?", two questions that don't usually go together in one occasion. The film Esprit de Corps managed to combine these queries and made its audience wonder.

Set during the Marcos regime, Esprit de Corps is a gripping story of avarice for power and lust/love. Two ROTC cadets (Sandino Martin and Lharby Policarpio) fight for the highest position in their unit, led by the aggresive Major Mac (JC Santos). Will the two do anything to gain power? How will Major Mac choose the best cadet to fill in his shoes? The film focuses on Major Mac's interrogation with his candidates and how he uses his position to fulfill his desires.

This film is Kanakan-Balintagos' (formerly Aureus Solito) entry to Cinema One Originals 2014 which won Best Director, Best Production Design for Hai Balbuena and Best Actor for Sandino Martin. This was adapted from Solito's one-act play which gave the audience the feel of watching the theatre in an intimate space. Simple yet engrossing, the screenplay is a work of a genius. It may represent the culture of corruption of power within the military and/or government. It could be too queer because of the steamy making out scenes between the actors and some frontal nudity but this film is one of the best examples of scripts that don’t literally discuss the issues. The political issues were shown, not told.

The technical aspects of the film were superb. Photography was flawless. Most of the film was taken in a small interrogation room and the lighting fit every emotion the actors had to produce.

The actors are worthy of a standing ovation. Their efforts and talents are obvious with all their sweating and moaning in most of the scenes. The three main characters were given justice. It even looked like they went through military training before filming. The breakthrough performances should be noticed by the big production companies as we now lack real talents in the mainstream media.

Kanakan-Balintagos experience and knowledge in the arts was evident in every aspect of the film. Verdict: Esprit de Corps deserves an A. If you get turned on, please do it at home.