By Palawanderer - November 14, 2014
THE Classic Swan Lake ballet is making a comeback at the 19th Season of Ballet Manila this Nov 15 and 16 at the Aliw Theater at Pasay City. This will showcase the choreography by Marius Petipa and Lev Ivanov and music by Peter Tchaikovsky. Featuring are Maxim Chaschegorov and Katherina Markowskaja of Bavarian State Ballet for the Gala shows.

Prima Ballerina Lisa Macuja-Elizalde who serve as the Artistic Director of Ballet Manila told us during our sit down interview that Swan Lake is her most performed ballet ever, and serve as the benchmark for all ballet company worldwide, thus it is one of the most challenging act to do as ballerina for a career,

“One of my most performed classical ballet aside from Nut cracker and Don Quixote,
Swan Lake is ballerina’s ballet, the leading ballerina can make or break the show” Macuja Said.


Swan Lake has roughly estimate of 50 to 60 in total performances by Ballet Manila alone, and the difference for this year’s performances are the new set of costumes for Act 1 scene, the sets also did some renovation and the ending part is been change a little bit. But Macuja emphasized that the choreography and the music are all the same. “it’s one of the most well-known ballet, even the common public well know what’s Swan Lake even just watching the movie black swan or Barbie’s swan lake Cartoons, definitely the most popular classical ballet.” Elizalde Added.

Swan Lake foretells the story of Prince Siegfried who falls in with Odette that is cursed to being a swan at night. Evil Rothbart tricked the Prince to fall in love for Odile, the Black Swan. But the Prince realizes his mistakes and ask for Odettes forgiveness, and the lovers decide to jump into the lake to break the spell. The villains vanish while the lovers ascend to heavens above Swan Lake.
BM finest Ballerina Mylene Aggabao, Dawna Mangahas and Abigail Oliverio takes the challenging dual role of Odette and Odile.

Macuja-Elizalde told us that it took one month for Ballet Manila to prepare for this show, it’s been performed wayback then that’s why it’s easy for them to restage it all over again. But what’s challenge her is the casting issue in which BM has more boys in the company rather than girls, all her girls are vital for its part and losing one of them due to unavailability like sickness is really a major issue that she need to attend to right away. And being a world renowned Prima Ballerina she assures us that this kind of issues is taken care of immediately without suffering the standard that she sets for any production of BM. 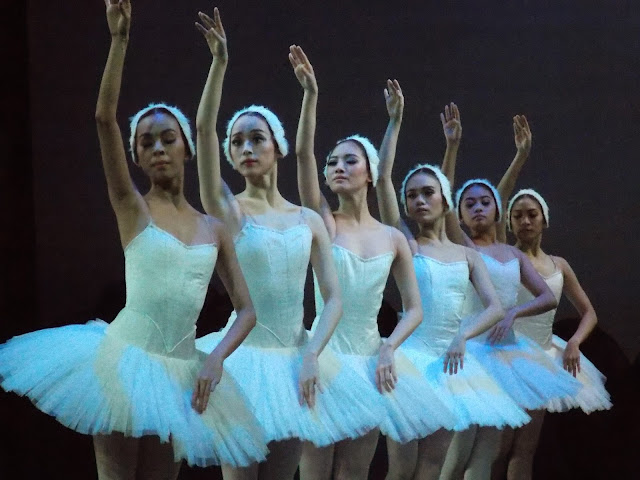