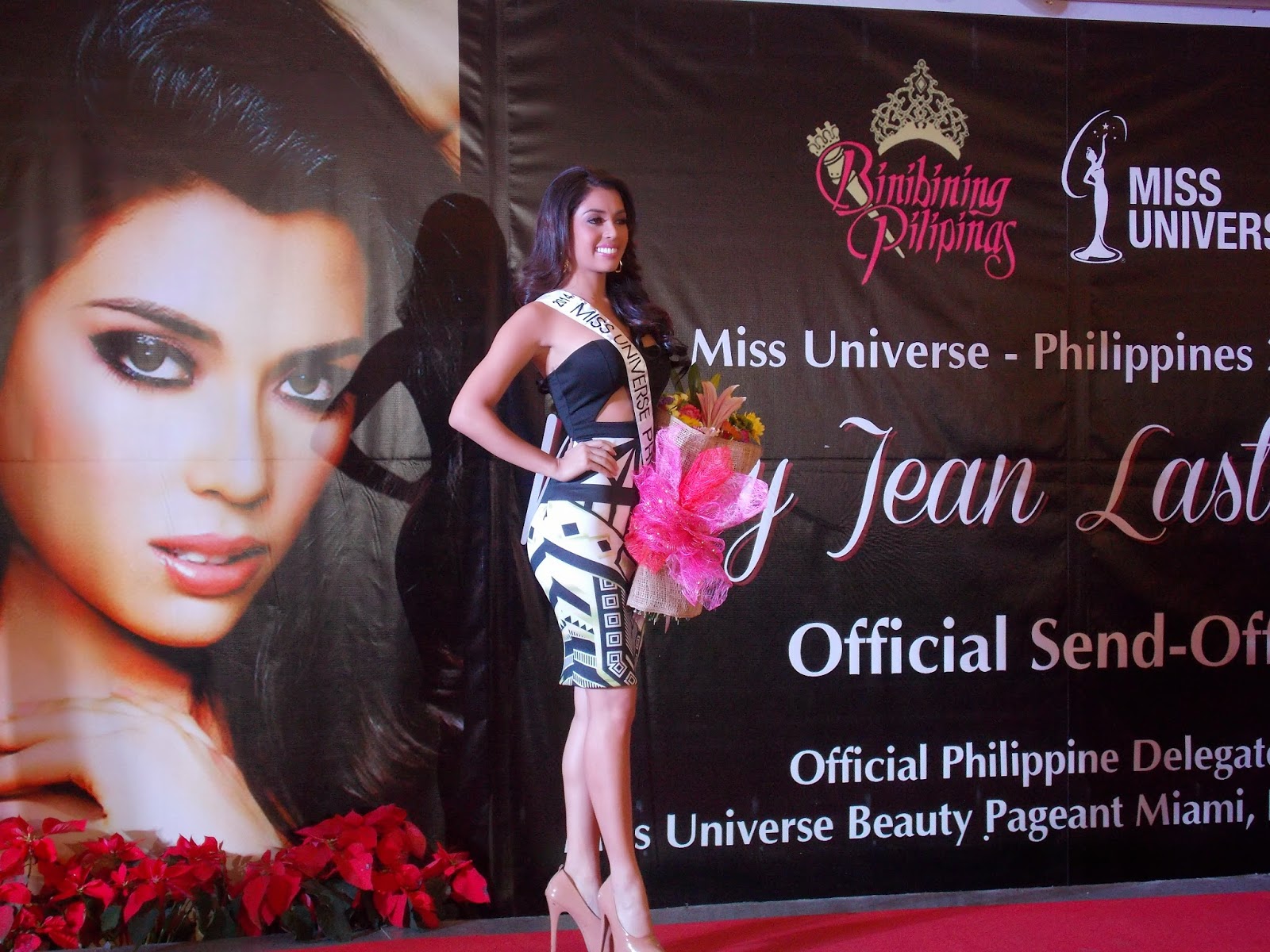 27-year old Mary Jean Lastimosa had her send-off, last December 18, 2014 at Balay in Cubao. MJ as she is fondly called was a native from North Cotobato, a province located in Southern Philippines, known to be an advocate to fitness and owns a fitness and spa in Davao. She completed her degree in Computer Engineering from the University of Davao and loves working out at the gym, travelling, modeling, dancing and surfing the web and the Philippines’official representative to 2014 Miss Universe Pageant to be held in Miami.

Journey To Binibining Pilipinas 2014
Mary Jean Lastimosa is no longer a newbie at the Bininibinig Pilipinas stage, having competed on 2011 where she finished 2nd runner up and then on 2012 where she landed as one of the top 12.  Her twice failure attempts, hesitated her from joining the 2014 Binibining Pilipinas and it was an abrupt and the toughest decision she ever made in her life. Her faith and determination to be crowned as Miss Universe – Philippines 2014 was inspired by another former beauty queen,  whom after three attempts was then crowned Binibining Pilipinas – Universe 2004, in the name of Maricar Balagtas who represented the country in Quito, Ecuador.

During the question and answer portion, Miss Universe 2013 Gabriela Isler asked her: March is the women's month. For you, what is the greatest advantage of being a woman?
She replied: “The greatest advantage of being a woman is being able to compose herself. Just like here, we're standing in front of thousands of people, not knowing if you're going to cheer for us or boo us. But we try to compose ourselves. We keep the emotions and show the beauty that is in us and tonight, thousands of people are standing here, celebrating the beauty of women.”

Her answer to the question received the most thunderous applause from thousands of spectators at the Big Dome. She was the front runner and early favorite to win the crown. In fact, many predicted and anticipated that she will emerge as the queen. Prior to the Binibining Pilipinas Pageant, MJ said that she seek advice from people and one in particular was Binibining Pilipinas – World 1993 and 1993 Miss World 2nd Princess Ruffa Gutierrez  for the question and answer which as you know the most difficult part of competition in beauty pageants especially, Miss Universe. Days prior to the pageant , Ruffa was training, coaching and giving her the support needed through Viber and text and that she prayed to be in the top five  and to be named as Miss Universe – Philippines was just a bonus to her. 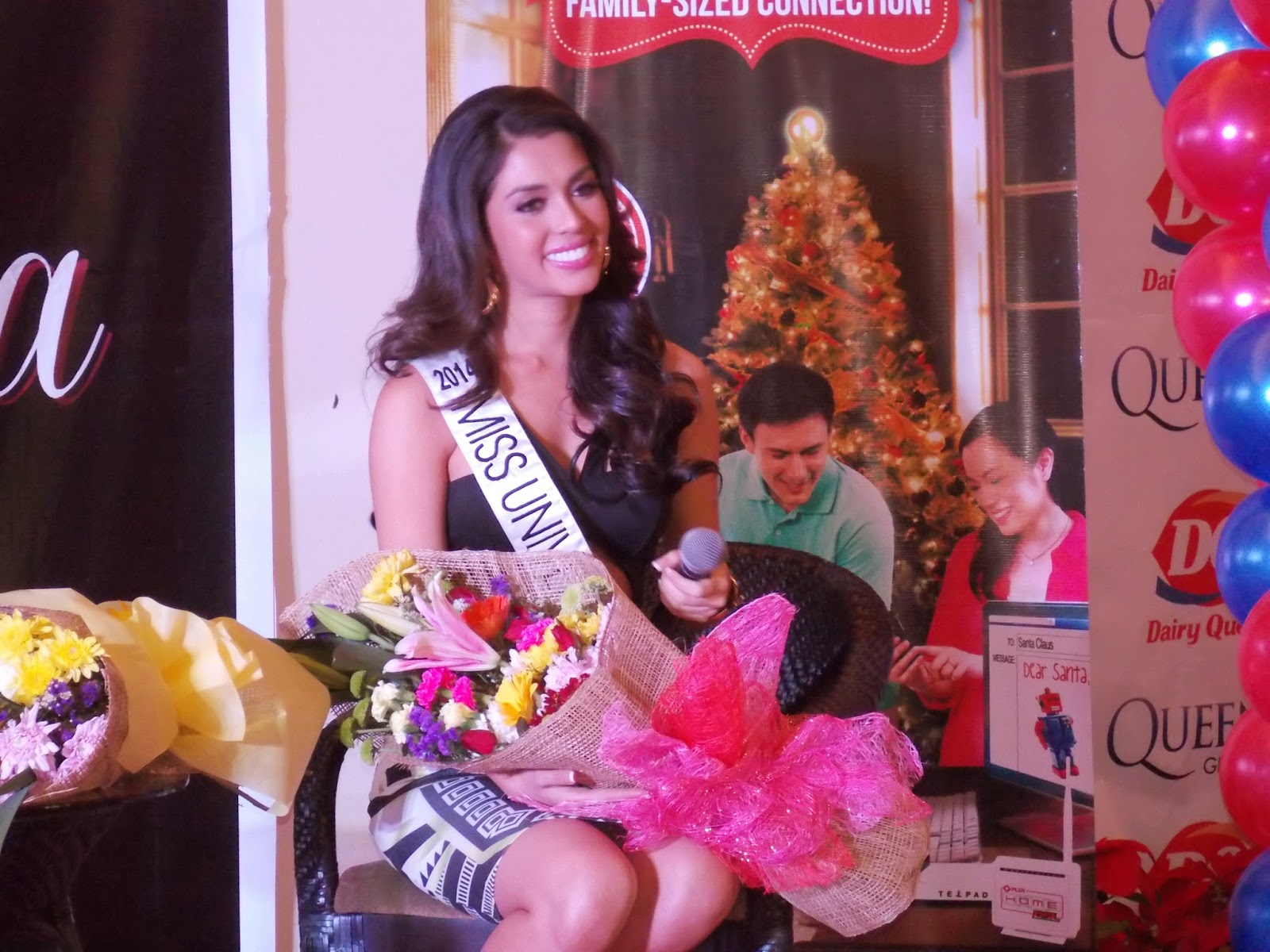 Road To Miss Universe 2014
At the US Century Bank Arena at Florida International University in Doral, Miami, Florida on January 25, 2015 Gabriela Isler of Venezuela will crown her successor, the 63rd Miss Universe and 88 candidates around the world will compete for the title. The Spanish-Arabian-Filipina is all set for Miss Universe said the BPCI. They added that she's confident, very well poised and ready to finally clutch the Miss Universe crown which will be the third for the Philippines if ever. Her preparation and training under Binibining Pilipinas includes courses on personality development and cultural immersion conducted by Dale Carnegie, practice sessions for question and answer prepared by the Entrepreneur School Of Asia and body toning and fitness training and exercises  at Gold's Gym. MJ revealed that she focused and firmed up on her communication skills to have a greater edge.
Madam Stella Marquez De Araneta, Chairwoman Of Binibining Pilipinas Charities Incorporated, said during the official send-off that, “ Of all the six meaning the two runner-ups and the four titleholders Tourism, Supranational, Intercontinental and  International, MJ has it all, she never missed any fittings, events and commitments. She was really focused and determined in all her trainings and tasks as our representative to Miss Universe in Miami." Her best friend, 2011 Miss Universe 3rd runner up, Shamcey Supsup told MJ,  "to know herself better, to know her values and her stand in life because by knowing herself it will give her confidence that will allow her to shine.” While 2010 Miss Universe 4th runner up Venus Raj, 2012 Miss Universe 1st runner up Janine Tugonon and 2013 Miss Universe 3rd runner up Ariella Arida through online conversations said. “not to feel pressured because nervousness can be seen by people, instead look natural, bubbly and to show the real you.” 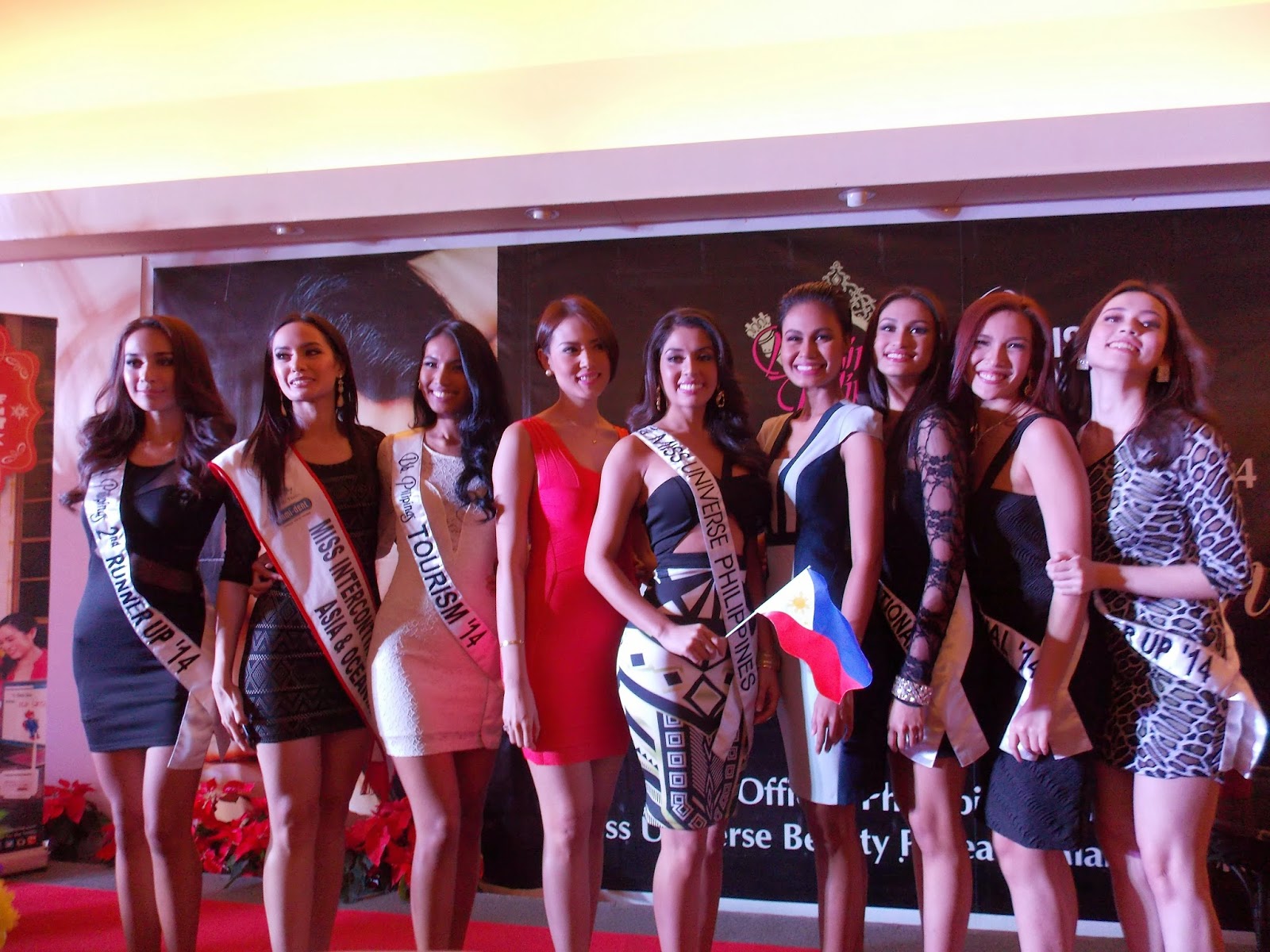 And when MJ was asked if she really feel pressured to win, she said: " The pressure will always be there, but I use it as a channel to fuel me to become more competitive and focused. I don't let the pressure get to me. The Miss Universe is a once in a lifetime event, and I hope to treasure every moment, be grateful for the experience and just showcase the beauty of the Filipina the best way I can.” During the press interview, she was asked, what gift will she give to Donald Trump and Gabriela Isler? She responded, “locally made chocolate to promote the greatness of Filipino.” The 2014 Philippines Sexiest Vegetarian Celebrity named by PETA confessed she loves chocolate in one of the clip from Binibining Pilipinas.  Another question from the press, what will stop you from competing to the Miss Universe? She replied, “nothing will stop me from competing because it has been my dream, I've worked and trained so hard. In fact, when I heard the news, (pertaining to the passing away of her uncle) I didn't think about it, what I did was I stepped up and immediately put on my make-up then proceed with the training.” Sergio Lastimosa, served as acting father to MJ when her parents left to Saudi Arabia, he was very supportive to her Miss Universe mission and he's even willing to watch the pageant despite the illness. Our representatives for the last four years has landed in runner up  placements consecutively in Miss Universe and the untimely loss of her uncle was another reason why MJ was channeled, fueled and determined to win the crown, her motivation and desire was very clear.  And for that, you have my FULL SUPPORT -
For more information on Miss Universe and the Binbinng Pilipinas, visit www.bbpilipinas.com andhttp://www.facebook.com/realbbpilipinas
Miss Universe-Philippines