Lenny Kravitz in Manila this March! 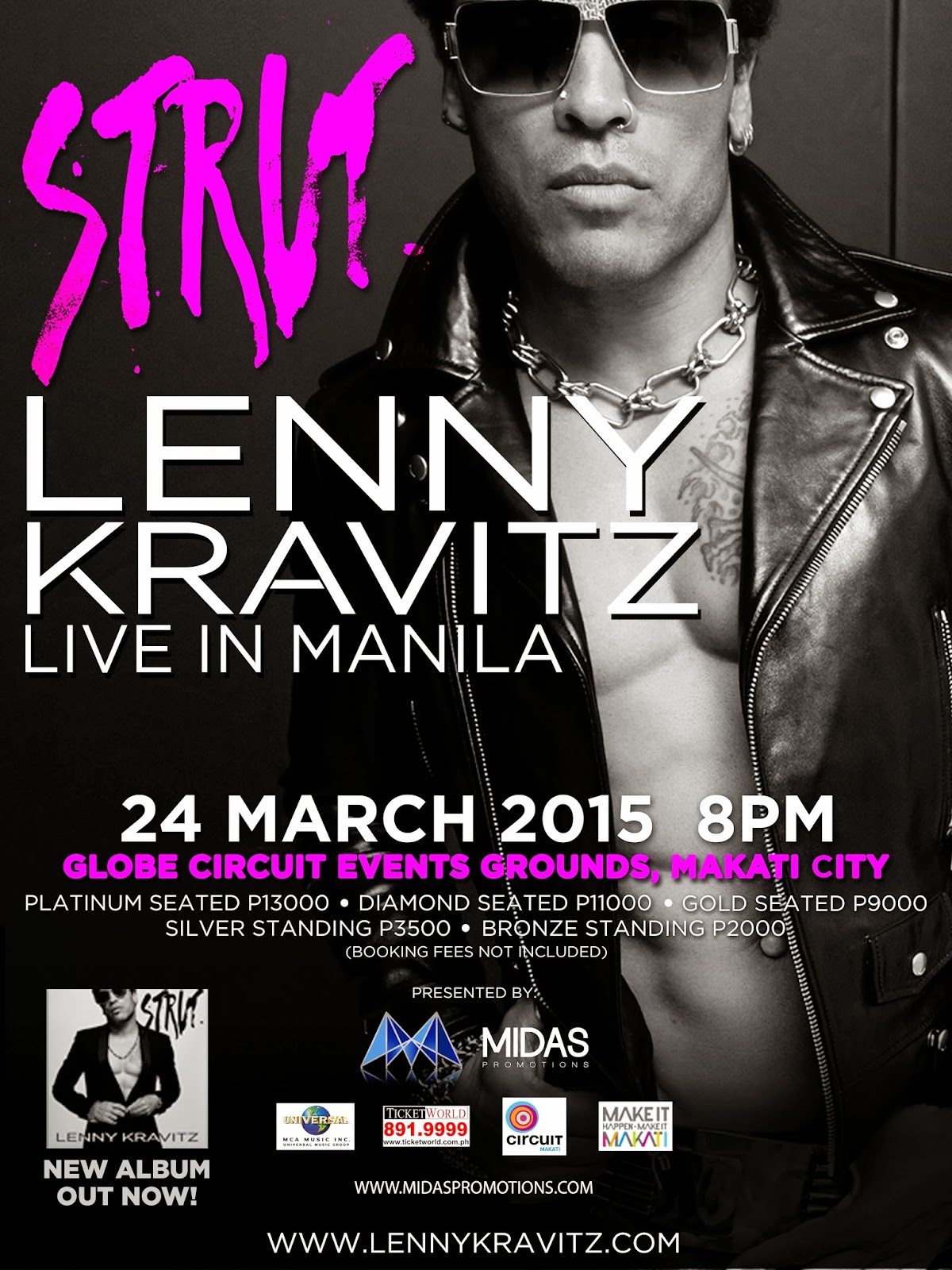 Wondering if you’ll ever see him perform live in Manila? This March 24, 2015, Lenny Kravitz will strut to Manila for the first time. One of the preeminent rock musicians of this generation will have you grooving to his hits and cuts from his latest album “Strut”.

In his 20-year musical career, Kravitz has changed rock music with his own brand of 60’s and 70’s soul, rock, and funk. He stood out with his undeniable presence and classic sound, transcending race, genres, and style. The industry is definitely listening to his work with his long list of collaborations with various artists from different backgrounds like Madonna, Jay-Z, Alicia Keys, Aerosmith, N.E.R.D, Mick Jagger, P. Diddy, and more. To add to his long list of musical achievements, he holds the record for most wins in the “Best Male Rock Vocal Performance” category at the GRAMMY Awards. He has sold over 40 million albums to date. The rock icon is also an accomplished actor with notable works in the critically acclaimed movie Precious and the box-office hit The Hunger Games as Cinna.

Lenny’s 10th studio album, “Strut”, is a reunion of sorts to his rock & roll roots. “This record brought me back to a place of what I love so much about music,” Lenny Kravitz says, “back to the feelings I had when I was in high school. It’s a real rock & roll record – it’s raw, it’s got soul and it came together really quickly.” Even with a full plate from shooting movies and managing his creative firm, Kravitz Design Inc., the GRAMMY winner drew inspiration while shooting The Hunger Games: Catching Fire, thinking of song titles, lyrics and riffs purely on instinct. Recorded back home in Bahamas, he wrote, produced, arranged, and laid in almost all the tracks himself to give the album the sound as raw and a clear as he remembered it from his earlier albums, “I feel like I’m just beginning, like I’m just hitting my stride.” The album, his first release since 2011, has 12 tracks including his sultry and infectiously groovy “The Chamber”, “Sex”, and “New York City”

Finally, the multi-award winning singer, songwriter, and multi-instrumentalist will make you experience his raw sound live at the Globe Circuit Events Grounds in Makati City for a one-night only show on March 24, 2015 presented to you by Midas Promotions. Tickets are now available at all TicketWorld outlets. Tickets prices are as follows Platinum (seated) – 13,000 | Diamond (seated) – 11,000 |Gold (seated) – 9,000 | Silver (standing) – 3,500 | Bronze (standing) 2,000. For inquiries, call 891-9999. Get more details on www.midaspromotions.com and www.lennykravitz.com.