Leading Lady The Musical, the next big thing in Philippine Theater. 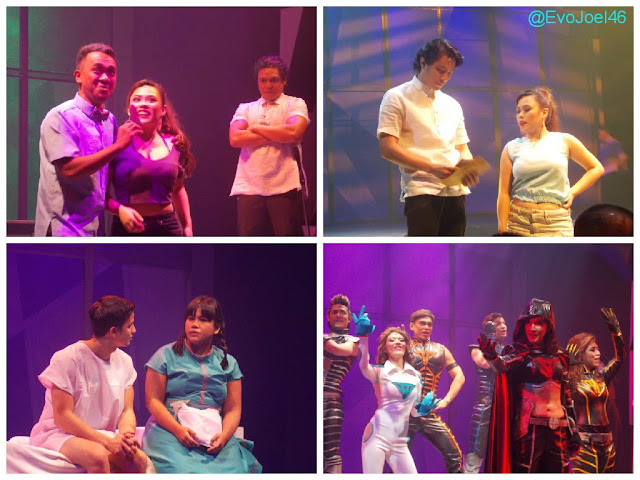 I always wondered why there are some people who admire villains. They would say they can relate to these scoundrels. Relate to their evil aspirations? Are people naturally evil? They would even say, "Ang guwapo guwapo ni Loki!". Really? That dreadful face that does nothing but harm?
Maybe "Kung Paano Ako Naging Leading Lady The Musical" can explain. Created from Carlo Vergara's one-act play, with music and lyrics by Vince de Jesus, Leading Lady the Musical is the first release by Dalanghita Productions. This could be the next big thing in theatre as the skill was evident by the direction of Chris Martinez.
We follow the story of two sisters, Mely and Viva. Mely, ordinary yet diligent, (Bituin Escalante and Frenchie Dy, alternating) is hired as a maid by a group of English-speaking Pinoy superheroes called Fuerza Filipinas. One of her bosses, the telepathic Leading Man (Markky Stroem and Hans Escktein, alternating) falls for her. And yes, they fall in love with each other. In the midst of their love story, the younger Viva (Kim Molina), always jealous of her sister, is hired by a group of villains called Kayumanggilas to infiltrate the house of Fuerza Filipinas. So good versus evil. The attractive and famous Fuerza Filipinas versus the plain and vindictive Kayumanggilas. Mely versus Viva. Mely and Leading Man versus the world. These conflicts make up entertaining intertwined story.
Leading Lady the Musical excels in almost every aspect of stage productions.The sounds are great (perhaps they used recording software for beginners).  The plot could be too simple but twists and humor can make your day or days. Special mention to the leader of Kayumanggilas, Senyor Blanco (Nar Cabico), who made the audience literally LOL with his grammar gaffes. Even the Fuerza's robot created some laughs.
At first, I thought, why do the Fuerza Filipinas heroes speak English and sound so rich? While the Kayumanggilas are the "common" Pinoys? Then I realized, this is the current state of Philippine society. The elites are good-looking and are deemed heroes, while the ordinary Pinoys are...ordinary and always try too hard to be elites. We relate to villains because we always want to be better. We always want to be those people on top. (Fine, I realized that after a Q&A between the audience and the production after the show.)
Anybody can be a hero. Even Mely and Viva can be heroes. Anybody can be a hero even without superpowers. Even superheroes fail. And die.
Four words. Towel-clad Markki Stroem. Or was that three words? Markki Stroem is just one word, right? Alright, he sings and acts really well. Seriously, he defines the character Leading Man. Bituin Escalante and Kim Molina delivered outstanding performances as expected. And of course, Menchu Lauchenco-Yulo, who played Madre de Dios, the leader of Fuerzas, was divine, especially her abs. The collaboration between the actors from English and Filipino productions is genius. This is one of the best cast ever on stage.
Oh such great music. Every music number can make you smile and/or laugh. You wouldn't care that much about the technicals, as you would enjoy the entire show. Maybe I did notice that part, Viva's transition into a super villain. She just walked off stage leaving her doppelgangers, and she came back with a different costume after a minute. There could have been a better way of doing that.
I can't help but compare this production to the recent musical by the Ballet Philippines which was also about superheroes. Mandhid's story has more depth. But Leading Lady has more entertainment value, better humor and even better choreography.
Verdict: A. Towel-clad Markki Stroem! Was that too loud? I'm kidding. Watch it because you are a cultured Pinoy.
"Kung Paano Ako Naging Leading Lady the Musical" runs until June 7 from Friday to Sunday at 8 pm, with 3 pm matinees on Saturdays and Sundays. Venue is at the PETA Theater Center in New Manila, Quezon City. For ticket inquiries, call Ticketworld at 891-9999. Tickets are at P1500, P1200 and P800.