The must see Authorial Intent.

By Palawanderer - June 27, 2015
A very unconventional play happens last June 24, 2018 at the Gonzaga Fine Arts Theater inside Ateneo De Manila University in Quezon City.  it’s the staging of “Authorial Intent “by playwright Itamar Moses, that tell a story of a couple who move in a condominium, and then suddenly they fell out of love or something that became challenge to the struggling couple, and the way they deal, discuss and argue is really beyond horizon.  Plus the wit and comedy of all will make you wonder, it is not easy to catch up but through the performances progress, story is just simple and happy at the end.

What I love most in Authorial Intent is the humor and the greatness of how excellence the actors are, plus the set-up is so complex and the feeling of understanding the two characters is awesome, feels like they take you to New York or first world thing.

Authorial Intent as written by Moses who is based in New York, he also author other full length plays such as Outage, Bach at Leipzig, Celebrity Row and others. He is a member of Dramatists Guild, MCC Playwrights Coalition etc. Moses is born in Berkeley, California in USA. 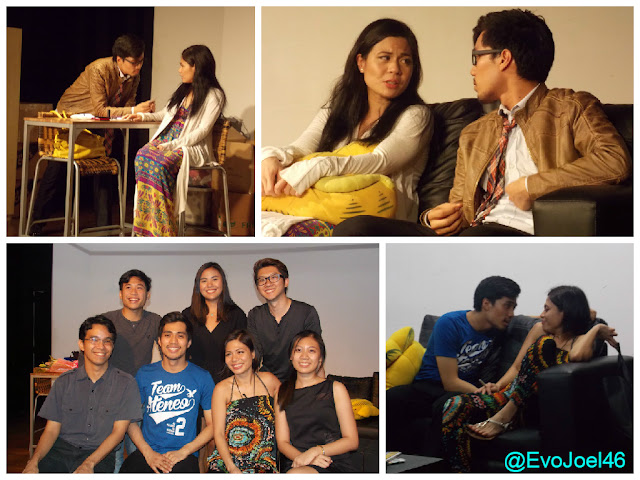 The artistic team for this ADMU production is under the Fine Arts Program, headed by Missy Maramara, the Director and also one of the actresses who play as Character A.  She is currently the MFA-Wielding Instructor of Fine Arts Program and English Department, an active member of Silly People’s Improv Theatre (SPIT).  Aside from Missye there two more great actress alternating for Character A role.

Character B is played by Manuel Jan Molina who by the way is so charming and oozing with potential to be the next big thing in theater world, he is a sophomore Management Engineering student in ADMU who happen to have  acting training from Loyola Marymont University and ABS-CBN Star Magic.  His alternate is Carlo Rivera who also lectures in Ateneo’s English Dept.

Authorial Intent open last June 24, and have schedules June 26, July 2 and 3, 7pm at the Gonzaga Theater inside ADMU campus in Quezon City. Tickets are at P200 and can be reserved through mobile number 0923-317-4852. Or check their Facebook page at www.facebook.com/ateneoauthorialintent.