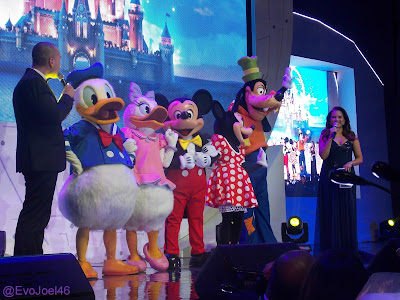 The Magical Night that happens in SM MOA Arena.
By Krystelle Dacoco.
Contributor

It was a great opportunity to witness as The SM Group officially announced its partnership with the best family entertainment in the world Walt Disney Company to bring the Disney brand in SM stores. The two companies aim to bring Disney at SM’s entertainment property. The extravagant event that was held in SM MOA Arena last Sept 1, 2015,  and was attended by extreme people in the business.
While entering the venue, I was fascinated of what I seen. Tiffany chairs for the guest, luxury sofa for VIP, buffet table for each side of the venue, but what catches my attention is the dessert tables in every corner. Everyone is enjoying the food while the orchestra is playing. The show starts with the opening song from Mandaluyong children’s choir singing “When you wish upon a star” from a Walt Disney movie Pinocchio sung solo by Noel Comias. After the opening song is the introduction of the SM and Walt Disney Company. Talking back where they came from, how the business started until they succeed and become a legend.
I really admire how Henry Sy Sr. talked about the partnership with the Walt Disney. SM company aim to get “Disney Experience” in SM’s many recreation and entertainment. Paul Candland, President of the Walt Disney Company Asia, said that Disney would want to become part of their cultural fabric in the Philippines. But the highlight on the show is when the Star Wars effect drama of unifying the partnership, represented by Hans Sy, President of SM Prime Holdings, and Paul Candland, wherein they act like force in the said upcoming movie.
One amazing production number that night is the Star Wars dance  wherein Jedi fly high in the open space of MOA Arena, this is a teaser for the coming Star Wars: The Force Awakens. The prod is very nice, the lights and the sound complete the perfect effect of the story.
Listening to my favorite Disney song in my favorite Disney movie brings out the child in me. I feel giddy when Moresette Amon sang Part of your World from the movie “Little Mermaid” I was smiling the whole time while listening to her, she sang the song as if she is Ariel in the Little Mermaid. Of course, who would forget the theme song of Pocahontas “Colors of the Wind” J She nailed every song that she sang. I am in love ♥♥♥
The highlight of the event is the appearance of Mickey and Friends. Everyone is thrilled to see them. Goofy, Donald Duck, Daisy Duck, Mickey Mouse, and Minnie Mouse where present in the event.  Seeing them brings back my childhood memories and my inner kid. J

I could never feel tired and sleepy while watching the show. Everything is spectacular and worth every sleepless hour I spent just to attend the event. I would miss a big thing in my life if I let the opportunity pass. J Thank you SM for inviting us, and for my friend who invited me to the event.
Ill be happy to bring my daughter Kendra to Star Wars Christmas Galactic, a upcoming event and the first project of SM and Disney, wherein real life figurines of Star Wars character will come alive in all SM stores and Toy Kingdom. We will keep u posted for that.