Audire, dare to listen what you hear.

By Palawanderer - October 22, 2015
We rarely heard or seen a one woman act show now a days, and if there is one, it should be something interesting and actors must be really good at it. Artist Playground on its 3rd production is back with “Audire”, starring veteran stage Actress Angelina Kanapi, it’s under the direction of Jeffrey Camanag.

It is an experimental performance that showcases the process of artistic creations, inventions and discoveries, images and sounds are biggest part of it since the artist interact with it through her soul and conveyed its messages to the audience. 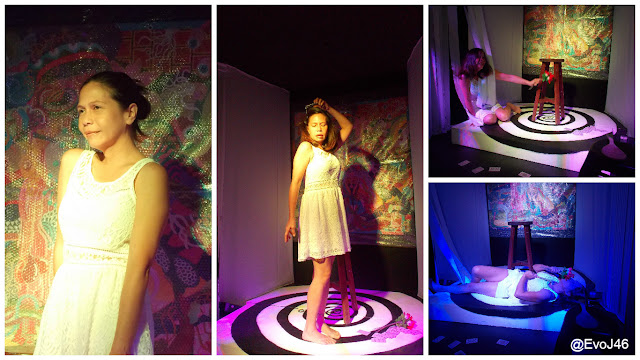 At first I thought there is no story at all, Kanapi acting comes natural along with his changing mode of artistically acting in one scene in a sort trash room, through those things scattered she narrate one by one her story of childhood, as a mother and the struggles of growing up. One notable Kanapi good to this play is her humor, yes she can make you laugh.
It is not a typical play I must say, not even a testimonial to called for, but it is refreshing to have watched such this to enlighten your artistic world and understand where it coming from.

“Audire” or Listen Carefully playdates are Oct 17, 24 and 31, and November 7, at 3 in the afternoon and 7 in the evening, venue is at 1701 The Little Room Upstairs, Lansdale Tower, Mother Ignacia Ave in Quezon City.  Actor/Director Roeder Camanag heads the Artististic Team along with Rojean Regoso as the production manager, Rein Martin Ramos for the Technical and Lights Designs, and Shiela Espina for the sound.
For tickets and reservation, call or text 0977-3062924.
Entertainment Filipino Play one woman play Theater Play