By Palawanderer - February 08, 2016
I remember the lesson in every classic Filipino film way back, “Ang nabubuhay sa patalim, sa patalim din mamamatay”. The latest film “Tandem” is not far from this thought, even though it didn’t orchestrate the usual hero style for its lead star, it is still a hero type of movie in the eyes of a brother.

Tandem is a story of two brothers, in this era of criminals using a motorcycle to steal and even kill in the name of money. One idolizes the other. The kuya shows heart to make his younger brother not be drawn to the realities of life.

Tandem stars JM De Guzman, Nico Antonio, and Rochelle Pangilinan. This is an official entry for the Metro Manila Film Festival New Wave Catergory last December of 2015 under the direction of King Palisoc for Quantum Films along with Tuko Film Productions and Buchi Boy Films. De Guzman was awarded Best Actor for his portrayal in the festival.

There are parts in the film that show slow pacing sequences. However the cast is convincing enough to earn pity at the end. One thing noticeable is the editing and the sound is really at its best. The use of a stray dog that looks like it was shot dead is one poetic value to look for in Palisoc’s first full length feature. Cinematography and the color really match the entire theme of the movie. No doubt, it is the same technical people behind the acclaimed Heneral Luna movie.

If you grew up in the Philippines and you are able to witness the era of action films monopolizing the movie industry in the past, Tandem will give you that feeling where Pinoy action stars are in its glory.

Tandem will return to theatres this February 17 nationwide. 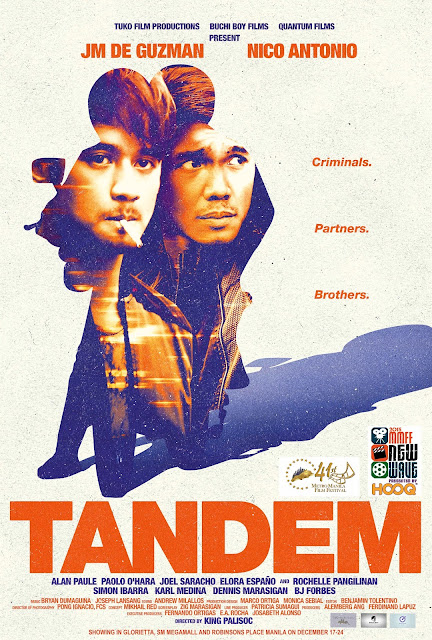 Autozik said…
Bike dashing has been an immense piece of Harley Davidson, practically from the earliest starting point of the organization. Truth be told the main appearance of a bike made by William Harley and the Davidson siblings, Arthur, Walter, and William, was in a Milwaukee, Wisconsin cruiser race.
March 26, 2016 at 1:54 AM

Jesus K. Beavers said…
That is it. It's an ideal opportunity to acknowledge it. Winter's here. I couldn't care less how much everybody is shouting about Global Warming. Icy is cool. What's more, when you're riding amid the winter it feels that much colder. Wind chill is a bitch. Exacerbate the element of velocity. The quicker you go the more the temperature drops. So the principle thought behind this months TAB. Step by step instructions to survive the winter on your cruiser.
March 26, 2016 at 3:12 PM