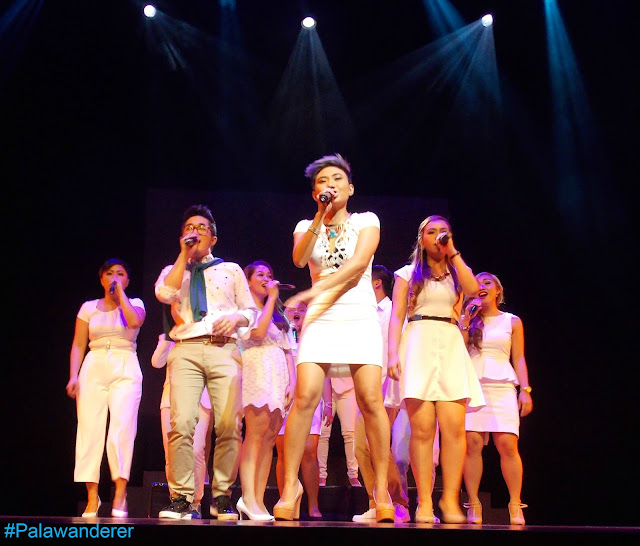 Philippine Contemporary A Capella Society headed by Krina Cayabyab and JJ Pimpinio, presented the first full contemporary a capella concert in the Philippines on the night of April 23, 2016 at Carlos P. Romulo Auditorium. Dubbed as " AKAPELA, " this one night show featured two of the best vocal acts in the country today.

Baihana, an all female vocal trio of Krina Cayabyab (Soprano 1), Anna Achacoso (Soprano 2) and Mel Torre (Alto). The group resonates from jazz to pop reportoire collectively was formed in Manila on May of 2008. They've just completed their first European Tour as part of  Lani Misalucha's concert in United Kingdom, Norway, Denmark, Finland and Switzerland. Known for arranging and performing songs in events such as weddings and gigs, Baihana will surely thrill you in such a way you can imagine.
Pinopela, a group of five females and four males were from the acclaimed choral group of Saint Louis University Glee Club of Baguio. The evolution of the group was brought by the AKAPELA Open when they placed second on 2013, then eventually named as the champion a year after they debut. The 2014 AKAPELA Champion, has since then receiving rave reviews  for their featured multiple performances at different occasions, events, functions, workshops and weddings, whether onstage and on televison.

Pinopela wants to be a pioneer in contemporary a capella and aims to introduce their styles and sounds in the international stage. On July 2, 2016, for the very first time they will compete at Singapore Polytechnic Auditorium for A Capella Championships. Different a capella groups, soloists and beatboxers are expected to render from pop, classic and jazz tunes. Pinopela, may you bring home the title. 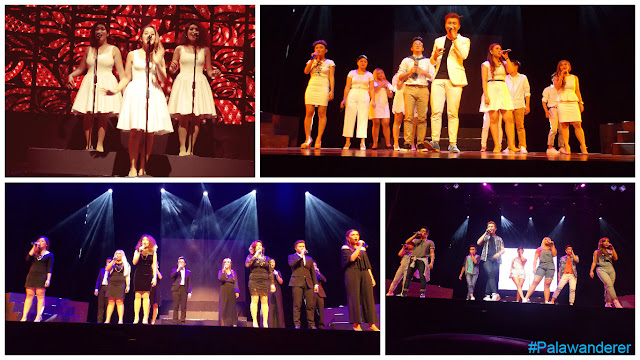 The one night AKAPELA concert in two acts, were consisted of medleys from cartoons, commercials, theme songs, pinoy jingle and OPM, became a delight to the patrons of this sold out concert. Baihana member, Krina Cayabyab and Pinopela member JJ Pimpinio did an impressive job in creating and arranging most of the songs. The aspects of vocal performance in a capella includes blend and balance that creates beautiful harmony, the uniqueness of the arrangement and quality, timing and rhythm of sound, interpretation of songs whether on solo or group, tone, intonation and diction is what an audience would like to hear. Baihana's rendition of " Nightingale Sang In Berkeley Square " was my favorite of them all. It was mesmirising and soothing, it sounded like a lullaby seriously.

" Pinoy Jingle Meldey " made the house in fun and laughter as it reminded us the commercial themes that became distinct, to sing with and play with like a child. I applauded it the most from Baihana, very nice. I enjoyed it. Pinopela's version of " Happy " was a great treat, I like what I'm hearing and their blending, it sounded light and upbeat. I was waiting eagerly for " Skyfall " on how Pinopela will treat this as their own? It was not as impressive as it sounded and arranged as it should be, but at least I like the idea of Pinopela's own rendition.

" Salidummay " was the winning piece of the evening and what a beautiful way to start the Act II, after the ten minute intermission. It became a signature song, from rhythm, intensity, intonation and tone, it really wowed the house, well applauded of the night.  I regard it as Pinopela's outstanding performance. Visual performance is another factor in watching an a capella show, that includes the energy and stage presence, appropriateness and creativity of movements, pacing, transition and blocking  and effectiveness of presentation, This aspect goes mainly to Pinopela because of multiple and numerous movements. Dancing while singing is a skill and Pinopela delivered it smoothly and beautifully.  Baihana is ok but not quite, maybe because of the song choices and genres. Thanks to Stephen Viñas, Nicolo Magno and Delphine Buencamino for choreographing these two.

AKAPELA was a rare music event in the Philippines because Filipinos are not appreciative on this type of music. And watching this was indeed an experience to share with. These two groups were proudly Filipino, young and full of skills. Catch AKAPELA concert featuring Baihana and Pinopela on tour, their next stop is Baguio.

benilhalk said…
Thank you very much for sharing the reviews from AKAPELA Concert. This concert looks adorable and enjoyable. I wish I could have attended this event. Have to host my sister’s shower so looking for a venue Houston TX for her party.