By Palawanderer - September 23, 2016
Chaolong, The ultimate fast food of Palawenyos that was simply called rice noodles, a great influence from Vietnamese refugees who stay and reside in Puerto Princesa is travelling from the last frontier, and this time at the historical province of Cavite.

Chaolong Hauz is barely two year old since it started operation April of 2015 in San Antonio near Sangley Point in Cavite City, but it didn’t last long they decided to move it to a more commercial and strategic location in Felipe st.

Benjamin Magura own the said resto along with Madilyn Faderanga who supervised the operation most of the time, the idea of bringing Chaolong in Cavite started after enjoying the said meals in Palawan, and from then on they study carefully the preparations and how to market it in Metro Manila. Benjamin is a Navy Officer that frequently assign in Cavite for his assignment. Magura and Faderranga are siblings with Palawan roots.
Madilyn told us that at first they import noodles from Palawan, but later on they decided to create their own home made rice noodles in order to survive the needs of their resto, she told us that being a fan of Chaolong in Palawan, they maintain the real ingredients and its taste to make it authentic ala Palawenyo style.

The serving for one bowl is really big enough to comfort any hungry stomach, like one bowl of Pork Buto-Buto cost P89 that comes with one hardboiled egg that makes it special, while the regular serving cost only P79. They also offer small bowl for P69 for those who can consume the big bowl.
There is also a Beef stew for the same price per serving, and of course the best partner of Chaolong cannot be absent, the French bread, plain bread cost P25 while with meat is P35 each, they have Asado, Tuna and Chicken fillings as well for P55.

The 35 seating capacity resto is located at 1229 JP Felipe St at Brgy. 29-A in Cavite City. For commuters you may take any UV express at the SM MOA terminal and advice the driver to drop you at the McDonalds in Cavite City, and from there is a stone away for the location of Chaolong Hauz just exactly at the crossing intersection. They are just across the Olarte’s Pizza or Landbank Bldg. 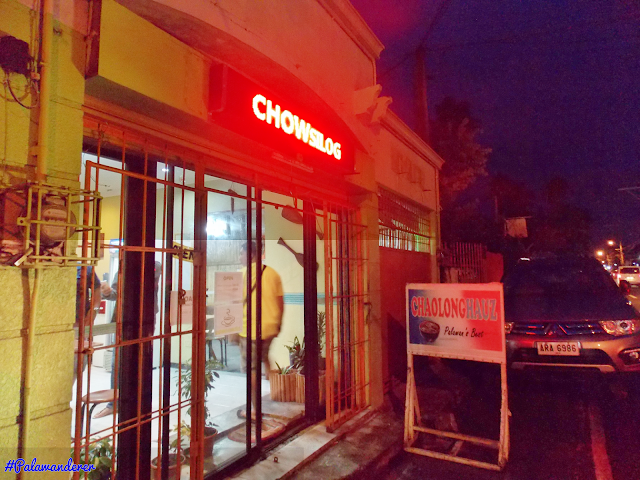 Aside from Chaolong, they also offer ChaoSiLog a combination with fried rice and egg with add on such as Danggit (fried dried rabbit fish) or Squid. They are open Monday to Saturday from 8 in the morning to 12’midnight, and on Sunday they open 2 in the afternoon till midnight.

Chaolong Hauz is also open for delivery only for bulk orders within Cavite area, you may contact them at mobile number (0948)099-3120.
Chaolong from Palawan Food Resto in Cavite City Rice Noodles

Franc said…
The chaolong looks really tasty and sumptuous for a soup. It's nice that you can add other meal complements too.
September 26, 2016 at 8:05 PM

Palawanderer said…
It is called the hangover food in Palawan, Chaolong have to be known thats why other meals are available. Thanks Franc
September 26, 2016 at 8:24 PM

Elizabeth O. said…
It would be awesome to try this restaurant out. Their dishes are perfect for the colder nights of the year, very comforting!
September 26, 2016 at 11:35 PM

Fred Said said…
I guess this is like pho. I would like to try this if a branch opens here in Quezon City one day. Vietnamese food is really remarkable for that fresh taste.
September 27, 2016 at 8:22 AM

Lexhansplace said…
this looks good, though i have never heard of it or tried it.. great learning new things from your site..
October 1, 2016 at 6:43 PM

Lexhansplace said…
NEVER HEARD OF OR TRIED THIS BEFORE, WELL AMD GLAD TO HAVE LEARNT OF IT HERE, GOOD TO KNOW NEW THINGS...
October 1, 2016 at 7:16 PM