The Horrible In Blackbird.

By Palawanderer - September 06, 2017
Actor's Actors' THE NECESSARY THEATRE latest performance of critically praised "Blackbird" is currently playing from September 1 - 3 and 8 - 10 at Carlos P. Romulo Auditorium, RCBC Plaza, Makati. Written by Scottish playwright David Harrower in 2005 and winner of 2007 Laurence Olivier for Best New Play, Blackbird was inspired by sex crimes offender Toby Studebaker after abusing a minor aged twelve. It tells the story of a 55-year old man named Ray, played by Bart Guingona and a 27-year old woman named Una, played by Mikkie Bradshaw-Volante. At his workplace, Ray was surprised and shocked by an unexpected visit of Una, whom he sexually abused when he was 40 while Una was 12. Una recognized him upon seeing a photograph whom she later searched and tracked. Ray who was then arrested, charged and imprisoned for statutory rape, was seen distressed, disquieted and disturbed. Fifteen years later, they meet again. The two clashed and collided in a stringy and lengthy confrontation, descriptions and questions. Both were torn by fear, anger, curiosity and confusion. 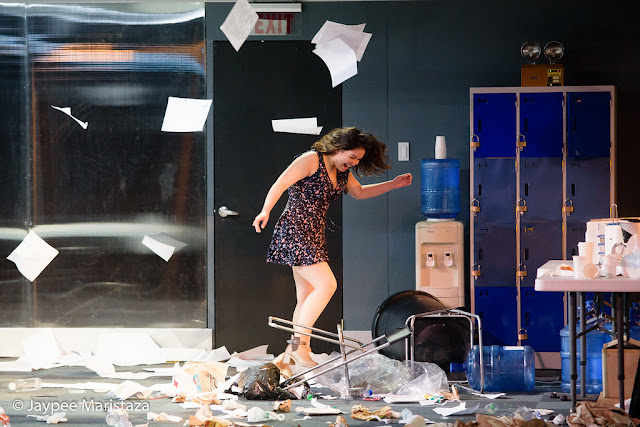 Harrower's perturbingly play is beautiful, rich in comparison and contrast and lots of symbolism. Though the ending was what I anticipated, still the flashback and foreshadow was evident, very symbolic. In fact, the script is a jewel. Television, film and theater veteran actor Guingona as always, did an impressive portrayal, he has the characteristics of Ray. He has always been great at his craft. Seeing Volante as Una for the very first time onstage with this piece was a pro. She was consistently and sustainably delivering the most striking lines. Not to be missed was her long monologue, a thrilling revelation of the script. That was the signature scene of the play, moment of revelation. Both Guingona and Volante interpreted Harrower's script disturb and abusively. Directed by Topper Fabregas with beautiful set and lights design by Joey Mendoza and John Batalla, a must see play for matured audience.
Call Ticketworld at 891-9999 or log on to: www.ticketworld.com.ph for tickets. Prices: Orchestra Center (1,200), Orchestra Sides and Back (1,000), Loge (800) and Balcony (500).