An Evening Of Legend, Rhythm And Color, Prelude To The ASEAN Summit Prelude to the 31st ASEAN Summit in which the Philippines takes the chairmanship for 2017, a gathering of best of ASEAN performances were showcased on November 4, 2017 at the CCP Tanghalang Aurelio Tolentino entitled " Roots And Rhythms: The Best Of ASEAN Performing Arts. Chris B. Millado, CCP Vice President and Artistic Director and Jonathan Tan Ghee Tiong, ASEAN Head/Assistant Director for Culture and Information Division Sustainable Development Directorate of Socio-Cultural Community and Secretariat did the welcoming remarks. The show started with a cultural and oriental opening improvisation sounds and dances featuring artist delegates from the ASEAN Member States.

The Lao People's Democratic Republic (Sinthavong Sengmounthong / Bouphakham Boutsa) performed a well-known folk tale from the humble Lao Hmong people who settled in Laos during the 18th century planting rice and corn. "Waiting For Love In The Cornfield" has a wistful music by Oudom Bouttavong complemented with fitting choreography by Khamphouang Inthavongsy. Malaysia (Muhammad Fairul Azreen Mohd Zahid / Mohd Sulhie Yusuf) highlighted the beauty of Malay drums and nature portrayed the natural elements of the peaceful life and the beauty of nature through music. The solo performance symbolized positivity of South East Asia combining Western and Malaysian contemporary elements. The modern and traditional multicultural richness and diversity of Indians, Chinese and Malay final combined performance was indeed a brilliant and unique collaboration. 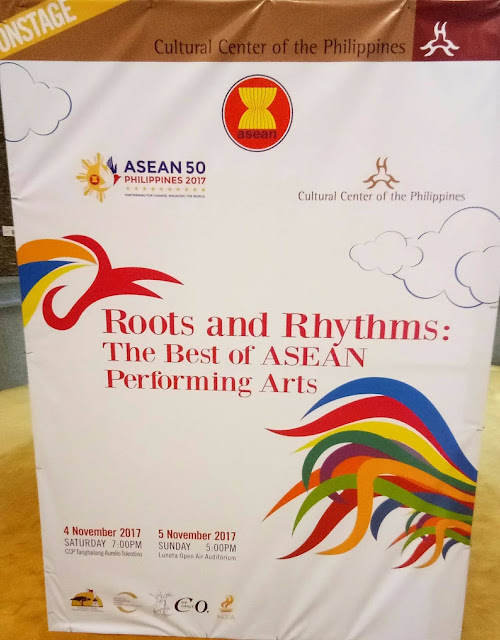 Act 2
Countries The Republic Of The Union Of Myanmar ( Myo Min Aung / Naing Lin) came with a dazzling three act performance beginning with " Myth Of The Forest, " a xylophone composition with melodies, rhythms and modulations inspired by deep forest beauty and mythical creatures. " Sylvan Journey " about a lone male dancer casted in a princely role brought the audience forest heartland and faraway kingdom. They ended with " Dway Mal Naw, " tells a story of lovers left with raging storm, filled with worries, heartbreak and longing with an enchanting music and dance.

The Republic Of Singapore (Sai Akileshwar V M / Ming Zhi Lim) performance were inspired by folklore " Zhi Nu, The Weaving Lady." The combined effort of Mridangam player and contemporary dancer exposed the idea of interweaving used to express the pain of separation, time, memories and reality. The Kingdom Of Thailand (Anucha Sumaman / Chaiyapruk Sitti) undoubtedly and expectedly presented a golden and glittering performance with a solo performance featured native Taphon and Khaek barrel drums. One of my favorites of the night, highlighted the unique sound beats and resonated in Thai classical instruments told in both contemporary tunes and traditional harmony.

The Socialist Republic Of Vietnam (Nguyen Ngoc Tram / Tu Thi Thanh Thuy) earned my fascination and admiration for the three act dance about legend, rhythm and color. First, two female dancers gracefully wielding hand drums. Second, the legend of Nguu Lang and Chuc Nu, the maiden and cowherd. The magical moment onstage ended with a folk dance dubbed as "Rice Love" that celebrated tilling the earth, planting and harvesting. And the dance spoiled both male and female farmhands when they glanced, flirted and took home either a wife or a husband. The Republic Of The Philippines (Diana Alferez, Alexander Dagalea, Mary Katherine Trangco, UP Dance Company, UP Padayon Rondalla and UP Tugma) did a komedya excerpt of the well-known legend of maidens "Putri-Anak".

Save the best for last indeed. I haven't heard this piece until they performed that night. Sad that I missed the original full-length version when it was staged years back. The more than 2 hour show in two acts ended with an ensemble performance of all artist delegates from the ASEAN member states.