Yesterday, Tomorrow and Today: The Miracle Within Lives In "A Christmas Carol."

Fresh from the commercially successful and critically beautiful production of Newsies, 9 Works Theatrical restaging of Menken and Ahrens' A Christmas Carol, The Musical, presented with more grit, more depth and more spirit. Globe Live co-produced the musical based from the 1843 novel of the same title by Charles Dickens, created something new this Yuletide tradition for Filipino families with A Christmas Carol. From December 1, 1994 to December 27, 2003 the show was presented annually at New York City's Paramount Theater in Madison Square Garden. It tells the story and journey of a wealthy old man, Ebenezer Scrooge whose life is full of bitterness and losses. Encountered and haunted by the ghosts of his past, present and future, Scrooge transformed into kinder and gentler man after he realized and uncovered the miracle within, the spirit of Christmas and the unconditional love of family and community. 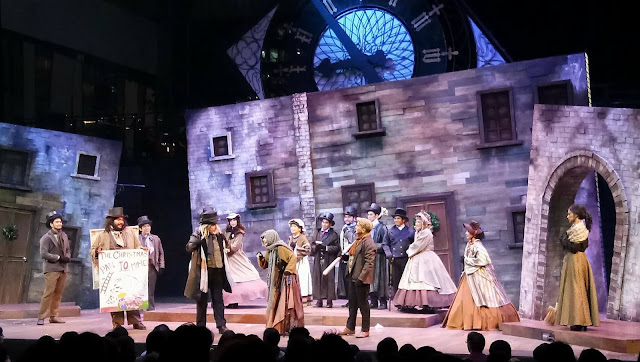 Being a regular musical patron on both local and international production, immediately caught my artistic attention the set designed by Ed Lacson, set rendered by Louie Mendiola and set executed by Nikko Metal. The huge period and themed clock reminded me of Wicked, was a crucial and symbolical piece for the retelling and pacing of the show. The three permanent sets from center left, center and center right created a perfect weight and balance and it complemented a perfect visual and scenic spectacle in my sight-line.

Another very good placement was the loft that housed the orchestra pit in the the left and the choir in the right. As the overture played, it was soaring high, hauntingly beautiful kinda like, The Phantom Of The Opera. Daniel Bartolome conducted the 16 piece orchestra 9PO (9 Works Theatrical Philharmonic Pit Pop Orchestra), composed of professional musicians, trained in the fields of Classical, Modern, Post-Modern, Contemporary and Pop. The newly formed 21st century orchestra is an affiliate of 9 Works Theatrical to cater the growing demand for weddings, parties and events. Shakira Villa Symes made an impressive mixtures of color in lighting needed to set the mood, to heighten the scene and to intensify the emphasis. 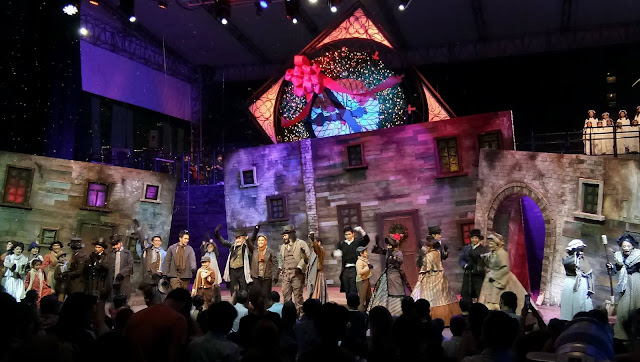 Resident director Robbie Guevara did it again from motivation and blocking it has always been a pro and will never a con. The stage business was simply gratifying, satisfying and intensisying whether it's a soliloquy or the ensemble. One particular scene that moved, touched and overwhelmed me was on how the spirit of Christmas was interpreted in the scene " Abundance And Charity, " at the beginning of Act 2. Ditto with Newsies, it was a delightful treat to see the company sung and tap danced made possible by incredible and immense choreographic talent duo of PJ Rebullida and Yek Barlongay.

The man on the titular role as Ebenezer Scrooge don't need further introduction as Miguel Faustmann owned it, nailed it and praised it regardless of the version. The three ghosts that haunted Scrooge deserve nothing but a raise. The lamplighter (Past), charity show barker (Present) and blind beggar woman (Future), each of these thespians resembled there characters as Lumiere of Beauty And Beast (Franco Laurel), Jean Valjean of Les Miserables (Nico Dans), there was even a moment that he looked like a Jedi and Lucy Barker of Sweeney Todd (Rissey Reyes). I was thrilled and entertained that I saw scenes and interpretations derived from some of the most notable and iconic musicals as I watched it. A Christmas Carol, a world class and glorious act of Filipino talents from cast and production. The spirit of Christmas from yesterday, tomorrow and today lives #TheMiracleWithin. 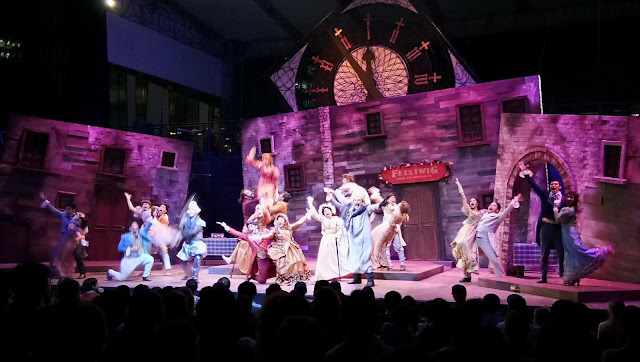 A Christmal Carol, presented by Globe Live and 9 Works Theatrical with special arrangement from Music Theatre International (MTI), runs at the Globe Iconic Bonifacio High Street Amphitheater on December 7-9, 14-16, 21-22 and 26-27 at 8pm, December 10 and 17 (Sundays) and December 25 at 7pm.