By Palawanderer - February 21, 2018
Prior to becoming a Principal Dancer of Cincinnati Ballet and Corella Ballet and the First Soloist of Boston Ballet, 23 year old Joseph Michael Gatti loves to play baseball in his native town. He was invited to play the titular role, " Don Quixote, " Ballet Philippines' last production of its 48th Quintessential Season. To date, it's the 15th performance of Don Quixote by Ballet Philippines and Gatti's first appearance in the company and his first time in the country. The 48th season will be Margie Moran's last term as president. She will be then succeeded by the current Treasurer Kathleen Liechtenstein beginning 49th season. The two nights that Gatti performed with The Manila Symphony Orchestra, one of Asia's first Symphony Orchestra conducted by former Resident Conductor of Philippine Philharmonic Orchestra Jeffrey Solares, he stunned and thrilled Filipino fans with his solid and fluid movements from allegro to adagio while in arabesque and allonge. 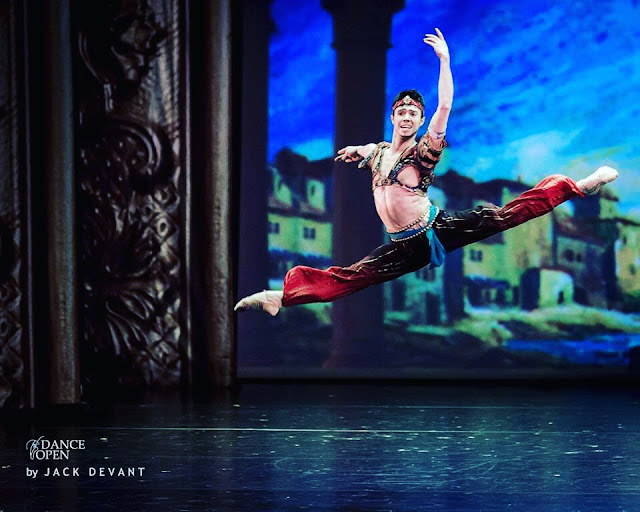 Being an avid balletomane of Ballet Philippines, Gatti's performance is the best of the season, his pirouette variations, pas de chat and pas de bourree are perfect. He is effortlessly and flawlessly exquisite from leaping, high level of jumping and top spinning. Candice Adea as Kitri appeared as beautiful ballerina as expected. Adea and Gatti both guest artists created a perfect duo onstage. Their charm and charisma was visibly and vividly evident against a beautiful majestic garden and windmills during Act II and Act III. The whole company of Ballet Philippines ended the season with such beauty worthy of recognition. After the departure of both Gatti and Adea, other Guest Artists to appear onstage are Jojo Mamangun as Don Quixote and Ronelson Yadao as Espada. Resident artists Jemima Reyes and Monica Gana as Kitri alternates, Denise Parungao and Katrene San Miguel as Mercedes alternates and Victor Maguad and Ian Ocampo as Basilio alternates.
By adding P500 on your ticket, the bearer can enjoy delectable tapas and Spanish wine at the Main Theater Mezzanine prior to the show on February 17 (Saturday) and February 18 (Sunday) performance starts at 7pm, bar opens from 5:30 - 7:00pm. Catch the remaining performance of DON QUIXOTE at the CCP Main Theater on February 17, 2018 at 7pm and on February 18 at 2pm and 7pm. Call Ballet Philippines at (632) 551-1003, CCP Box Office at (632) 832-3704 or Ticketworld at (632) 891-9999. Tickets from 300 to 3,000.