Marawing Salamat: A Night of Recognition and Rehabilitation Through Opera And Fashion

HONOR
Lyric Opera of the Philippines (LyrOpera), a non-stock non-profit opera company incorporated in 2016, honored Filipino Classical Singers that served a living legends in the art of opera with their passion and dedication. Fides Cuyugan-Asencio, Francisco Carlson Aseniero, Gloria Dizon-Coronel, Irma Ponce Enrile Potenciano, Armida Ponce Enrile Siguion-Reyna, Jose Santos, Teresita Agana-Santos and Noel Espiritu Velasco, their contribution were recognized prelude to the show. The pillars of Philippine Fashion were also given recognition whose artistry and creativity made a testament and statement in the world of fashion. Ramon Valera, Pitoy Moreno, Ben Ferrales, Aureo Alonzo, Christian Espiritu, Joe Salazar and Salvacion Lim-Higgins were just some of notable Filipino couturiers who proudly interpreted and represented their creations with such uniqueness. Some of their creations were on display at the Main Theater Lobby for the new generation to see. 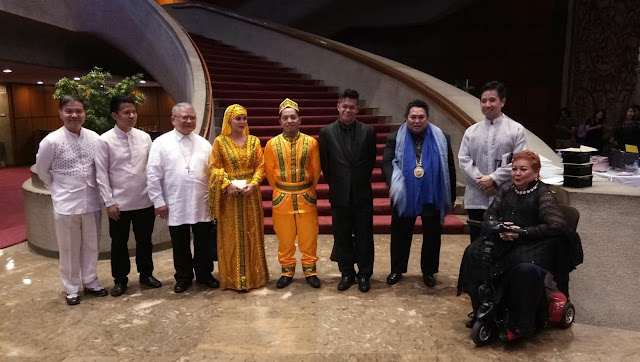 FASHION
THE BEST OF FASHION became a gathering of the biggest ever fashion for a cause project showcasing over 100 fashion and jewelry designers, fashion directors and choreographers, hairstylists and make-up artists, fashion models and muses and beauty queens. Directed by Raymond Villanueva and Nathan De Leon and conceptualized by Zardo A. Austria, the cultural fashion show reminisced and relived " The Pomp and Pageantry of Philippine Carnival Queens " as it highlighted the Filipino beauty and talent in a breathtaking parade of modern Filipina creations inspired from the glorious, bygone era of the Carnival Queens circa 1908 - 1939, undoubtedly became the precursor of modern day beauty pageants pre and post the war.

Beauty queens and muses paraded with such grace and poise wearing the fabled Filipiniana designed motifs from the traditional Carnival Queen period baro't saya, traje de mestiza and Maria Clara, the fantastic Filipiniana design inspired from the costume balls of the era, the goddesses: terrestrial, sea, fire and metal and celestial and the fabulous Filipiniana of the Kahirup Ball and Mancomunidad Ball and from Carnival Queen to Miss Philippines.

Presented by the Cultural Center of the Philippines and The Lyric Opera of the Philippines in cooperation with E. Zobel Foundation Inc., MARAWING SALAMAT: The Best Of Philippine Opera And Fashion happened at the CCP Main Theater on April 6, 2018 at 8pm. Duyog Marawi project of the Prelature of St. Mary was unanimously chosen as the sole beneficiary of this fundraising event for its rehabilitation.