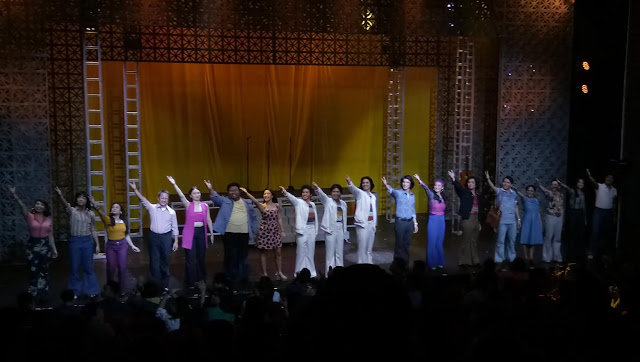 There are only quite few premier theater production companies in the Philippines consistently displaying the best plays and musicals from both Broadway and West End. My theatrical experiences both as patron and press has always been amazement and astonishment with 9 Works Theatrical. Their latest theater installment on its ninth year, Eto Na! Musikal nAPO! was making headlines when they transformed and transcended the classic repertoire of APO for the millenials to recognize and for the oldies to reminisce, what really take shape and take place during the '70s?

With book by Robbie Guevara and story by Jonjon Martin and Robbie Guevara, Eto Na! Musikal nAPO, is a musical with moving and mesmerizing songs, narrative and interpretative scenes that pierce through the heart and mind. A great courage and challenge in imagining scenes during Martial Law period and interpreting songs from APO, played an integral part to achieve historical and factual depiction on this two-act musical. Guevara and Martin made a symbiotic relationship, a perfect tandem to be watched on the next production. Daniel Bartoleme and Orly Dela Cruz and the rest of 9 Works Philharmonic Orchestra simply called as 9PO, deserve recognition for new arrangements and orchestrations of the classic signature hits with different twist and turn, leaving not only realization but combination and conclusion at its finest.

The minimal and experimental set and the two structural and symbolical prosceniums, designed and framed as tormentor and teaser as stage opening became a statement of the show and testament of the flow. Not only that 9 Works Theatrical is the theater for all season, it has always been a trademark as soon as you enter the theater, you will be greeted by splendidly stunning set by Joey Mendoza.

Director Robbie Guevara made an impressive and expressive dramatic interpretation and motivation, the mother and son scene in "Batang Bata Ka Pa" was superbly satisfying and the scene in "Pag-ibig" was heavily gratifying. His direction has always been effective from verbal versus nonverbal, comparison and contrast to even flashback and foreshadow stage business.

Eventhough I anticipated "Saan Na Nga Ba?" will be at the finale, how they ended the show made it lovelier, not the usual scene you expect. The star of the show is Jobim Javier, radio DJ for Jam 88.3 and the son of Danny Javier. He played Butch opposite with Sab Jose who played Michelle. His first musical and he made a mark with his tiring and exhilarating performance. Very impressive as a first timer onstage. What a great leap from Jon Philippe Go from his previous act. He is perfect for the role as Ray and I don't see any other actor from the company who can interpret and portray his character. Raul Montesa, his character as Mon stole the show, I hate him and I love him at the same time. All actors from this musical has its own way of interpreting and impersonating multiple characters, whatever and whoever it is, those lines, songs and scenes undeniably became instrumental and monumental for staging a class act. 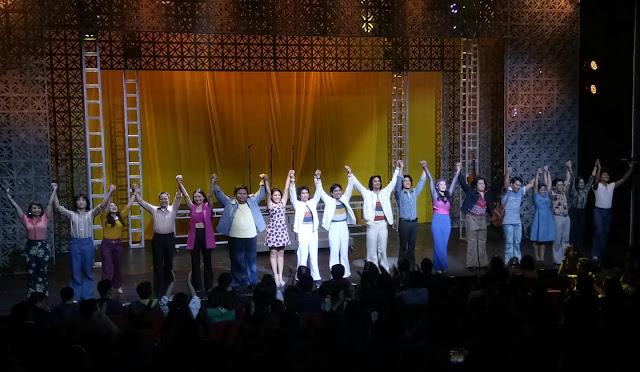 This musical is a revelation to millenials in terms of values and cultures and a recollection to oldies in terms of memories and histories. A walastik musical that brings you back and sings you back. Eto Na! Musikal nAPO! runs at Maybank Performing Arts Theater, Bonifacio Global City, on August 3-5, 10-12, 17-19 & 24-26, 2018, up to Sept 2 at 8:00pm on Fridays, Saturdays & Sundays, and 3:00pm on Saturdays & Sundays. For tickets, call Ticketworld at 891-9999. A limited number of performances are available for fundraising and block buying. Please contact 586.7105 • 0917.554.5560 • info@9workstheatrical.com.