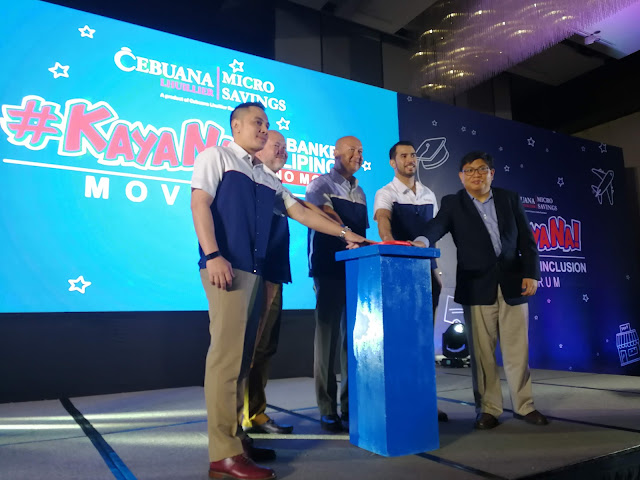 As per Bangko Sentral ng Pilipinas, only 48% of Filipinos are into saving money thru bank or kept in their house, the rest of the said percentage have many issues why they don’t consider putting their hard earn money in a bank. The said data is considered the lowest in the whole South East Asian region.

Among the reasons of this are the requirements needed in opening an account, not all have two government issued ID’s, the bank locations mostly in commercial spaces are hard to find, the que and the time you will spend in filling up forms and depositing money in a bank branch is a waste of your productive day, plus the reality that most banks are requiring high initial deposit, the maintaining balance is unlikeable to many that for some reason you will be surprised your money is gone due this policy.
Last February 28, 2019 in New World Hotel Makati, Cebuana Lhuiller, the country’s largest micro financial institution launch their micro savings program to cater for Filipinos to easily open their bank account for as low as P50 with no dormancy and maintaining balance, this is in line with BSP’s call for financial inclusion of unbanked Filipinos No More movement, it was tag as the #KayaNa by Cebuana Lhuillier

According to Senator Franciz Escudero, the senate committee chairman on banking call this initiative as a good move towards helping Filipino achieve in life, he emphasize that we should give importance on putting our money in banks, one advantages of that is getting approval for any loans, especially if you want to open a business of your own and needing capital. Escudero serve as the keynote speaker of the said event.
Cebuana Lhuillier Micro Savings is available in their 2,500 branches nationwide, all you have to do is go the nearest one and apply, just bring one (1) valid government ID and the initial deposit of P50. Make sure you also have the Cebuana 24K card as pre-requisite in opening an account.

Again there is no dormancy, no issue in maintaining balance and its fast and it will be confirm tru SMS, the card you will receive can be use also in some partners ATM for any transaction, you could also monitor your account status tru Cebuana Apps and can use in any online banking needs.
The launching of Cebuana Lhuillier Micro Savings Financial Inclusion forum is also attended by Pia Bernadette Tayag of Bangko Sentral ng Pilipinas, Director Dr. Alvin Ang of Ateneo De Manila Center for Economic Research and Development.  Tayag on her talks explain that only 23% of adult Filipinos have formal bank accounts, and 40% of that belongs to National Capital Region.

Ang discusses that most Filipinos are experts in spending money, but they don’t keep records of their expenses, one thing for sure is they know how much and what to buy when they have money.