By Palawanderer - May 14, 2019
After making hits in all digital platforms, OPM indie folk band Ben & Ben (formerly The Benjamins) finally release their debut album in the market in titled “Limawasa Street”, inspired by the street name that one of their members holds dear with memories  of personal comforts. Limawasa is derived from Butuanon word “Masawa” that means light.

"We wanted the album to represent a place of light by singing about hopeful perspectives in troubled situations," lead singer and guitarist Paolo Guico said.

This 9-piece act are behind the songs “Kathang Isip”, “Maybe The Night” and “Ride Home” and was watched and stream via Spotify and Youtube, they headline major concerts here and abroad and consider now as one the most popular band in the country today.

Limasawa Street, the debut album has 13 tracks including collaboration with Sugarfree Vocalist Ebe Dencel and Johnoy Danoy, they also acknowledge U2 and Dave Matthews for this album. 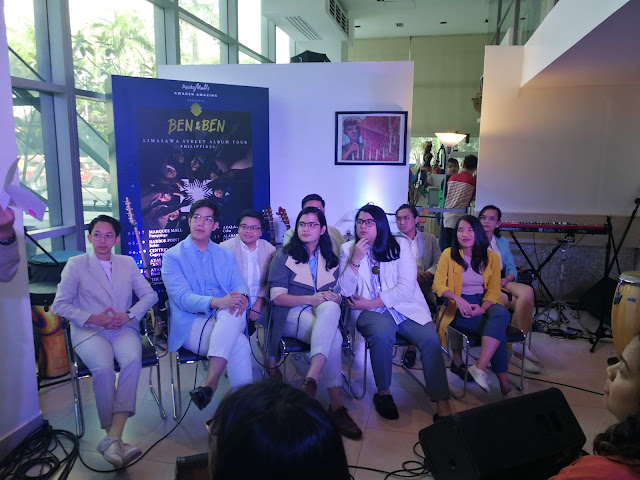 “The reason we are doing Ben & Ben, the reason in everything we do, I know it may become a showbiz answer, na we don’t want to be popular, but what we do in Ben & Ben is really for a purpose, of spreading messages that will put people maybe in a darker place, and bring them somewhere ng mas maliwanag ng kunti, magbigay ng kunting kaliwanagan in whatever way, that’s our goal in Ben & Ben, to bring lights to the lives of people, and hopefully can be reflected in our first album Limasawa Street.” Miguel Guico, vocals and guitar.

During its launch last May 10 at the Ayala Museum in Makati City, the band also announce that they just sign a recording contract with Sony Records, the debut album took them almost 3 months to finish due to busy and hectic schedules, the said album will be available via online selling site Shopee beginning May 31.

“Gusto namin magpasalamat kay God, whatever you believe in, no matter what religion you are, we thank God, our belief in God, Our belief in high power is actually where we get everything, because we believe we are a vessels of a message, our art, our songs don’t come from us, they come from God, they come from a higher being, naniniwala kami, lahat ng artists, kami ay vessels na dumadaloy sa amin yung mensahe na yun.” Miguel added.

Some of Ben & Ben songs were used into films such as Goyo, Exes Baggage, Siargao, Nakalimutan Ko Nang Kalimutan Ka, and the upcoming Pista ng Pelikulang Pinoy entry, LSS. Their debut album, Limasawa Street, is a widely anticipated release, with pre-orders having sold out within one week.