Clarita, the darkness in her. Movie Review

By Palawanderer - June 23, 2019
Clarita, the latest horror Filipino flick showing recently provides a new flavor in the horror genre of Filipino films, from to start to finish the movie gives a dark moment in all of its scenes, intentional somehow but it’s effective for a deeper understanding of its objective, it set our mood on how powerful the antagonist of the story.

The movie is just about the exorcism of Clarita that is set in the ’50s that became a national issue, it is a slow pace in storytelling the background of its mean character which is Clarita, there are many subplots to it like the story of the two priests and the reporter covering the event, there is one scene in the film when the reporter and the Psychologist is talking about Clarita, a guy shows up walking backward that leave us clueless, it was not explained in the film.

Jodi Sta.Maria as Clarita is good here, we used to see here in many teleserye crying most of the time, or make us kilig in her past rom-com films, but in Clarita, she provides a different aura, the oppressed and usually doing stunts as she crutches her bones up to the ceiling. But acting as possessed by the devil is something new to Jodi on the big screen, and I admit she delivers it very well.

Ricky Davao also did well in Clarita, his character as the main priest heading the Exorcism, I feel how worried his character is and it really shows in his performance on this movie.

Maybe the film didn’t have that much original style in presenting a possessed girl, yup we’ve seen that in many foreign films too, that kind of face, that black shadow effect, the bone wrecking part, the upside walking, the old voice recording, and those sound effects and gulatan factor.

What we love in Clarita is they stick to its main core of making it Filipino ambiance, the look and feel the music selection and using of old videos of Manila, the traditional probinsya life and the inside of a bahay Kubo, it is not OA in terms of horror that keep giving you gulatan or scary scenes, it is not even religious much to think most exorcism story falls on that. I admire it also that it is not bloody in presenting some seizure, and not that morbid too, and that’s because it was all happen in dark or dim lights effect in almost the entire film. 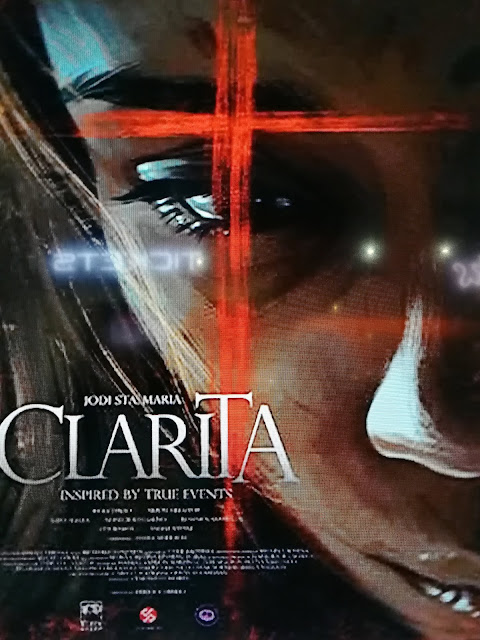 I so love how they perform backstory, that scene in the hospital where the reporter ask the attendant on what happen, it easily shifts right after to that scene without removing the said characters, yes it was done in many Filipino films in the past, but it still amazing on how they level up that particular scene probably with its good editing. Sound design is another factor to see it.

It is worth to watch, yes because it gives you a new perspective in seeing Pinoy horror movies, that Clarita delivers.
Filipino Film Horror Films Movie Review Pinoy Horror Movie