By Palawanderer - July 31, 2019
A whole new music festival is set to premier in the north of Luzon come August 24 at the Filinvest Mimosa in Clark field Pampanga, billed as Oddisee Music and Arts Festival organize by Docdef Productions, the group handling the annual Tagaytay Art Beat since 2016, and the recently concluded Fete De la Musique.

“Oddisee is a music festival happening up north, it’s crazy because the vibe is different, usually it’s in Tagaytay Art Beat but now we are bringing the music scene up to the north like Pampanga, a growing City and growing culture for music, and music lovers are all there, what we are doing there is providing indie musicians in the north.” Said by Reuben Pascual, Host of the upcoming music fest.
The one day festival is expected to draw around 3,000 people,  featuring almost 20 local artists and bands from the indie circuits, the confirm bands are The Ransom Collective, Munimuni, Leanne & Naara, Oh, Flamingo!, Carousel Casualties, Allen&Elle, Basically Saturday Night, Lola Amour, Indayo, Clarene Romea, Danidea, Ube, Titomo, The Cosmic Misfits, Never The Strangers, The Metro Fantastic, DJ Joey Santos, Dayaw, Wicked Adobo and Ysanygo.

“Docdef has been doing Tagaytay Art Beat for three years already, there is a clamor of having an events similar to Artbeat to the north, giving opportunity for the bands in the north such as Clark, Pampanga, Bulacan, it’s really promoting local music, it’s the Philippine music going around the Philippines, that’s how Oddisee started.” Explain by Lambert Cruz, the Marketing Associate of Docdef Production.
Tickets is P1,500 for the VIP wherein you were closer to the stage, a chance to meet them personally and enjoy some freebies as well, next class of ticket is price at P700 only, festival well start at 10 in the morning and may last until wee hours in the morning of the next day.

“They have an interesting line up, because the vibe there in Filinvest Mimosa is all nature, all green, it’s like a vacation destination for those people who have work, like a long weekend, it’s a place for the people to relax, chill and enjoy all the music, all the Filipino artist, I really suggest that everyone should be there.” Pascual added. 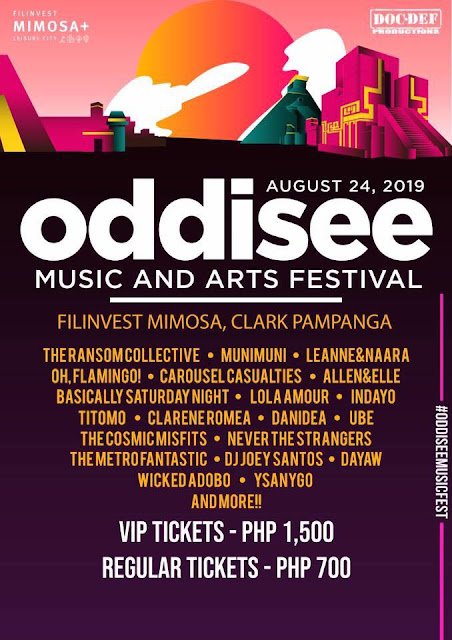 Oddisee Music and Arts Festival was officially launch last July 24 at 20:20 Bar in Makati City along with live performances from bands that will be part of it. Tickets for the Festival is now available thru mobile app Bliimo and www.mynila.com.
Art Festival indie artist Music Music and Art Festival Musicians