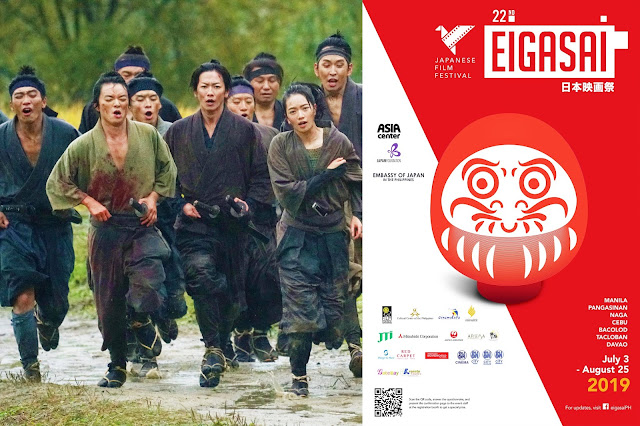 The movie that tells the story of the first marathon in Japan, is the opening film for much awaited Japanese Film Festival known as EIGASAI now on its 22nd edition that open last July 3 at Shangri-La Plaza Cinema and will last until August 3, 2019.

Directed by Bernard Rose, Samurai Marathon is based on Akihiro Dobashi’s novel Bakumatsu Marathon Samurai about the historical Ansei Tooashi, known as Japan’s first Marathon. Happen at the end of Edo Period, the lord of Annaka Clan holds a running contest, as training for his clan against potential attacks from overseas.

Like any other Japanese Films, Samurai Marathon is superb in storytelling as it sticks to its narration of blow-by-blow events, brutal scenes with random comedy is a come on, but what moves us is the outskirt farm life shown, it provides freshness in the film.

Other exciting films in the JFF | EIGASAI line-up includes: 1) The 8-Year Engagement by Takahisa Zeze; 2) KAKEGURUI by Tsutomu Hanabusa; 3) The Crime that Bind by Katsuo Fukuzawa; 4) Laughing Under the Clouds by Katsuyuki Motohiro; 5) Mixed Doubles by Junichi Ishikawa; 6) One Cut of the Dead by Shinichiro Ueda; 7) Perfect World by Kenji Shibayama; 8) Yakiniku Dragon by Chong Wishing; 9) The Tears of Malumpati by Keita Meguro; 10) Lu Over the Wall, an animated film by Masaaki Yuasa; 11) Mirai, an animated film by Mamoru Hosoda; 12) The House Where the Mermaid Sleeps by Yukihiko Tsutsumi; and 13) special screenings of award-winning Japanese film director Hirokazu Kore-eda’s feature films, including After the Storm, The Third Murder and the winner of the Palme d’Or at the 2018 Cannes Film Festival and nominee for the 91st Academy Award for Best Foreign Language Film, Shoplifters.

In partnership with the Cultural Center of the Philippines (CCP), the Japan Foundation’s continued support towards independent filmmakers brings another Japanese independent film to Manila: Lying to Mom, winner of the Best Film Award at the 31st Tokyo International Film Festival’s Independent Japanese Cinema category. The film is a drama mixed with humor depicting a family attempting to recover from sorrow. Katsumi Nojiri, who worked as an assistant director on The Great Passage and The Lies She Loved, among others, makes his directorial debut with his own original script.

Director Katsumi Nojiri will be present at the Philippine premiere of Lying to Mom on August 3 at CCP during the Cinemalaya Philippine Independent Film Festival, an allied festival of EIGASAI since 2016.

The JFF | EIGASAI is open to the public and is free of charge, with the exception of films to be screened at Shangri-La Plaza Cinema (July 3-14) which will be Php100 per screening. For detailed screening schedules and inquiries, please access the Japan Foundation, Manila website: www.jfmo.org.ph or call at (+632) 811-6155 to 58 or follow the official EIGASAI Facebook: @eigasaiPH for updates.