The hope story thru music of Dani Girl

By Palawanderer - July 15, 2019
5 years after, the exhilarating musical by Michael Kooman and Christopher Diamond’s Dani Girl is making a comeback this 2019 still produce by The Sandbox Collective with 9 Works Theatrical. It’s a story of 9-year-old girl Dani Lyon that is stricken with cancer, and her magical and transformative journey, together with her fellow warrior and best friend Marty, they go along with imaginary game shows, to outer space and all the silly games in between.

This is a comeback directorial for Toff De Venecia after he first produces and directs it in 2014. This year’s production is very much new in all aspect according to him, there are talkbacks after each show and strong multimedia effects were added in this re-staging.
“I love it because it’s about overcoming adversity, I love that it celebrates human agency, parang it celebrates a child's imagination and fighting spirits,  and I love it that it ask the heart questions, why is hope, why is cancer, why is God, why is death, parang this are things that people forget about because they were caught up in everyday lives.” De Venecia said.

The old cast was called again to be part while the new ones undergo some auditions conducted by the Sandbox Collectives. 2019 cast is composed of theater veterans like Lorenz Martinez and Juliane Mendoza alternating for the role of Ralph, and playing as Dani is Felicity Kyle Napuli, fresh from her role as Matilda in Asia, and the young Nala from the international tour of Lion King. Daniel Drilon from Fun Home and Newsies will alternate as Dani’s best friend and fellow warrior Marty.
“The material really talk to your heart straight, and the music is so beautiful, it's powerful, its resonance, it's piercing and it really touches the soul, and for some reason a lot of us in the company parang we’ve loved the musical so much, and we want the opportunity to revisit again, parang there’s a need to experience this material again something that talks about hope na parang a lot of us is in need of these days.” De Venecia explains.

Joining De Venecia is Sab Jose as assistant director and marketing and public relations director. And the artistic team are Ejay Yatco as musical director, Stephen Viñas as a choreographer, Faust Peneyra as scenographer and costume designer, Miggy Panganiban as the lighting designer, Joee Mejias as projection & video designer and Myrene Santos as hair and makeup designer. 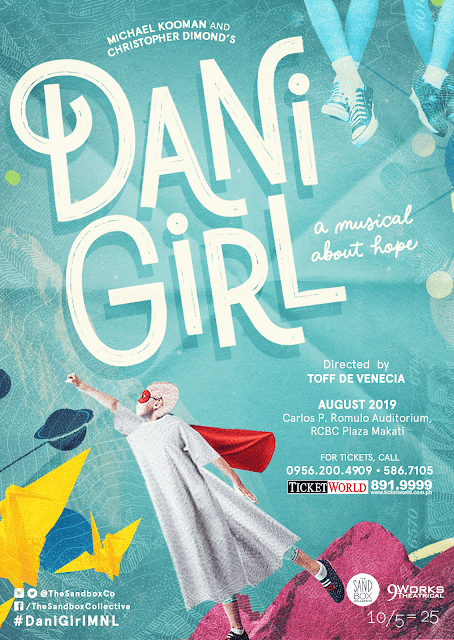 “This time were blowing up pandora's box and now we are going wild with staging, with scenography, we are working with a lot of visual artist, we have a different artistic team this time, and the direction is to make use of the found objects or things you found on stage, to sort of give birth to all the imaginations sequences, that’s something totally new.” De Venecia added.

Aside from talkback, a lot of immersion will happen in this restaging, they will have art exhibits and auctions, and the proceeds of the sales will go to Child Haus and Philippine General Hospital and other charity partners for Dani Girl: A Musical About Hope.
cancer Musical Stageplay Theater