The Dance of life at Pandanggo Sa Hukay

By Palawanderer - August 20, 2019
Cinemalaya 2019 full-length entry Pandanggo sa Hukay by first-time director Sheryl Rose Andes is a minimal to the intense life story of rural midwife Elena, played by Iza Calzado base on the Palanca Award-winning story by Andrian Legaspi.

The movie starts with the daily grind in the life of Elena, from the comfort of her home to the Lying-In Clinic to the distant family and her big dreams of working abroad, it gives us a glimpse of how midwives survive this crucial kinda profession.

The normal life of Elena is change when she was abducted by a group of bad people responsible for doing crimes in the area lately, she was asked to administer the pregnant fiancé of the gangmaster that will give birth anytime, and later on face the biggest change of her life, facing death and how to escape it if there is a chance.

Iza as always is such a delight to watch on screen, her beautiful face resonates in all levels even at a very intense situation, her calmness during a difficult situation in facing death is just in tune, no hysterical no drama, but I am more convinced that Ybes Bagadiong deliver the best performance as deeply rooted evil hoodlum, I’m rooting for him for Best Supporting Actor however the role is just short.

Pandanggo is just Elena, her childhood favorite dance being revive for a company outing that connects to her most struggle moment, it’s the only dance step she knew that serve as an instrument to please the bad people.

There is one particular scene that this gangster man calling his another comrade as gay, because she is weak and no hope to be successful in doing crime or stealing, we pause on that for a minute and somehow reacted, why such a stereotype on being gay is automatic weak as a person, even if the character that throws the line has no formal education, for me its uncalled somehow. 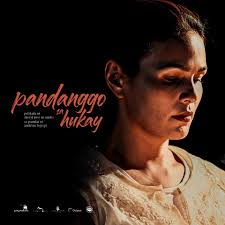 Honestly, the message that the movie wishes to convey is not that easy or clear to understand, presenting a daily life activity in more than an hour and later on shift to intense kidnapping and gun-totting to a rape scene, and murders, and end with job interview is something to rethink and analyze.

During its talkback after the screening, Director Andes emphasizes that the message the movie is trying to give to its audience is that, there are these crimes happening around us, that we are not safe no matter how we secure ourselves.

It is worth watching, a lot of comedy takes place that will make you smile, and the suspense will at least make you hold to your seats for at 6 minutes or less. Pandaggo Sa Hukay will have screening as Cinemalaya travel to campuses in the next months or so.
Independent Film midwives Movie Review