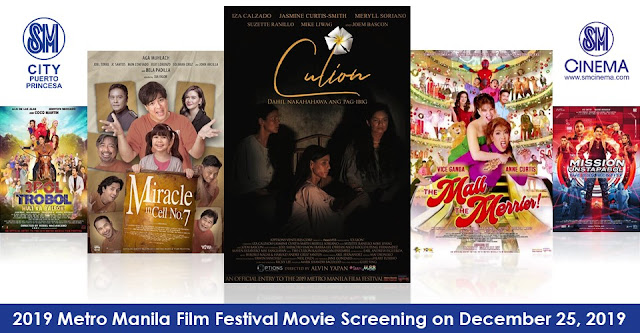 This year, eight films of different genres made it to the annual Metro Manila Film Festival (MMFF), which will run from December 25, 2019 until the first week of January 2020.
Here’s a list of MMFF 2019 films that Puerto Princesans and Palaweños could watch at SM Cinema on Christmas Day (December 25, 2019):
Miracle in Cell # 7 (G)
Genre: Drama, Comedy
In the Filipino adaptation of the 2013 award-winning Korean movie, Aga Muhlach plays the role of a mentally ill man, who is accused of sexually assaulting a little girl. Behind bars, he becomes friends with his fellow inmates and they plan to smuggle his daughter.
Director’s Club 1 | Schedules: 10:30AM, 1PM, 3:30PM, 6PM, 8:30PM
Culion (PG)
Genre: Historical Drama
Culion stars Iza Calzado, Meryll Soriano and Jasmine Curtis-Smith with the special participation of John Lloyd Cruz, but the town’s significance in world medical history takes center stage. Set between 1940 and 1941, it revolves around three best friends who are all afflicted with Hansen’s disease (leprosy) and how they walk the thin line between hope and despair. The movie aims to break the stigma, raise awareness, and showcase the beautiful story of the island.
Director’s Club 2 | Schedules: 10:15AM, 1PM, 3:45PM, 6:30PM, 9:15PM
M&M: The Mall, The Merrier (PG)
Genre: Family, Comedy, Musical
A 2019 Philippine musical family comedy film directed by Barry Gonzales starring Vice Ganda and Anne Curtis. There are lots of celebrity cameos in this film so watch out for that.
Digital Theater 1 | Schedules: 10AM, 12:45PM, 3:30PM, 6:15PM, 9PM
Mission Unstapabol: The Don Identity (PG)
Genre: Comedy
This is the 2019 version of the Vic Sotto Christmas treats. And Maine Mendoza teams up with Bossing for yet another MMFF goodie alongside Pokwang and Jake Cuenca, Tonton Gutierrez, Jose Manalo and Wally Bayola.
Digital Theater 2 | Schedules: 10:15AM, 12:30PM, 2:45PM, 5PM, 7:15PM, 9PM
3pol Trobol: Huli Ka Balbon (PG)
Genre: Action
Coco Martin, Aiai Delas Alas, and Jennylyn Mercado star in this happy movie that also features a happy crew of supporting actors led by Manila Mayor Isko Moreno, Sam Milby, Edu Manzano, Tirso Cruz III, Bianca Manalo, Jhong Hilario, Rowell Santiago and many more.
Digital Theater 3 | Schedules: 10AM, 12:15PM, 2:30PM, 4:45PM, 7PM, 9:15PM

Other 2019 MMFF entries that might be screened in the following days are as follows:
“Mindanao” by Brillante Mendoza
Genre: Drama, Animation
Judy Ann Santos plays the role of a mother caring for a child with terminal cancer, while handling the complications of having a husband, who is a soldier, active in a battle. Mindanao, the new movie directed by award-winning filmmaker Brillante Mendoza and written by Honee Alipio, was Graded “A” by the Cinema Evaluation Board.
Mendoza’s newest work brings together drama, action, and animation as Judy Ann’s character Saima Datupalo uses the epic tale of the brothers Rajah and Sulayman’s fight against a dragon to tell bedtime stories to her cancer-stricken child while her husband serves in Maguindanao as a military medical officer.
“Write About Love” by Cristano Aquino
Genre: Romance
ABS-CBN and GMA Network stars (Miles Ocampo and Rocco Nacino) collaborate in this movie as two writers who team up to make a blockbuster romantic movie. Rocco portrays a seasoned scriptwriter who encourages Miles in the craft. The two bring us behind the scenes of screenplays and movie making, and of feelings developing between paragraphs.
“Sunod” by Carlo Ledesma
Genre: Horror
The MMFF is not complete without a horror film. This movie stars Carmina Villarroel, Mylene Dizon, Susan Africa and Kate Alejandrino.
Book your tickets online at www.smcinema.com or download the SM Cinema App. (PR)