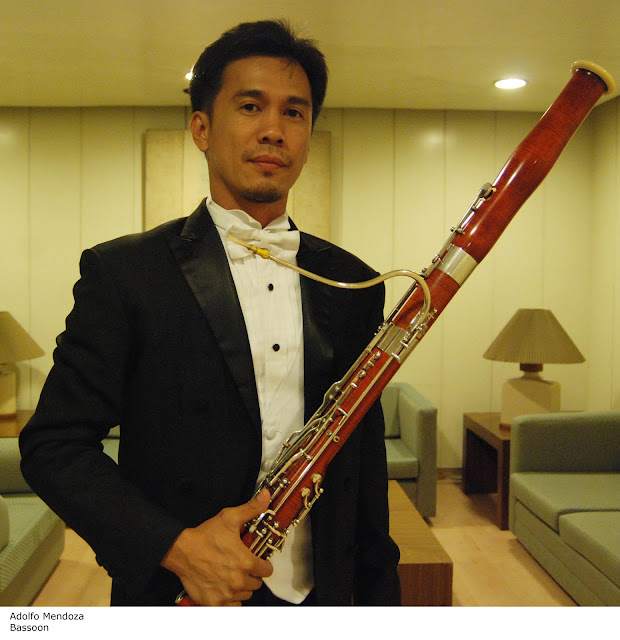 For the instrument petting zoo session, Mendoza and Andra will talk about the bassoon and demonstrate how it is played.  They will also perform classical pieces suited for the bassoon.

Adolfo O. Mendoza finished his Bachelor of Music in Bassoon performance at the University of Santo Tomas Conservatory of Music under Prof. Romeo Verayo and Prof. Arnaldo Custodio.  He studied with the NHK principal bassoonist. Prof. Koji Okazaki at the Elizabeth University of Music in Hiroshima Japan for his Master’s Degree.  He was a full scholar at the Hong Kong Academy for Performing arts under Prof. Kam Sui, principal bassoonist of the Hong Kong Philharmonic Orchestra.  He finished his Doctor of Musical Arts (D.M.A) at Texas Tech University in Texas, U.S.A. in 2016 under Prof. Richard Meek.

Mendoza was featured in the CCP’s Filipino Artists Series in September 2002 with Mary Ann Espina and as soloist of the PPO in the same year.  He is the Music Director and Conductor of the Lyceum Northwestern University Chorale and the Balon Dagupan City Government Chorale.  He is the founder and the president of the Pandaragupan Youth Orchestra, Inc., as well as the founder and music director of the Philippine Pops Orchestra.  He is also the Music Consultant of Dagupan City.  Mendoza is the Principal Bassoonist of the PPO, a faculty member of the Sta. Isabel College of Music and the Conductor of Trinity University of Asia Symphonic Band. 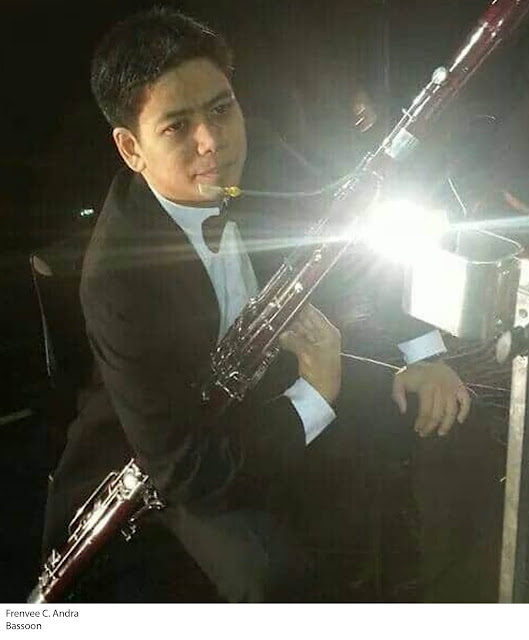 Frenvee C. Andra obtained his Bachelors in Music Degree in Bassoon Performance at the University of Santo Tomas under the tutelage of Professor Severino Ramirez.  He also studied under John Mostard and Adolfo Mendoza.  He pursued his Master’s Degree from Elisabeth University of Music in Hiroshima under the legendary bassoonist Koji Okazaki, Principal Bassoon of NHK Orchestra.  He founded the I-House Woodwind Quintet in Hiroshima.  He was also the Bassoon Principal of the Hiroshima Festival Orchestra in 2001 and Instructor of Bassoon with the Hiroshima Junior Orchestra.  Frenvee is the Saxophone and Bassoon Instructor at the Annual National Music Camp held every summer at the National Arts Center in Makiling, Laguna.  He was the principal Bassoon of the Manila Philharmonic Orchestra in the Orchestra Festival of Japan in 2014.  A former Principal Bassoon of the ABS-CBN Philharmonic Orchestra, he is now a member of the Philippine Philharmonic Orchestra and Conductor of Lyceum of the Philippines University Cavite Symphonic Band.  He is the Music Director of the Sta. Cecilia Band 89 City of General Trias Cavite.  At present he leads the newly formed Gentri Youth Symphonic Band which he co-founded with the City of General Trias.

A project of the Cultural Center of the Philippines and the Philippine Philharmonic Orchestra, the instrument petting zoo aims to promote appreciation for musical instruments of the orchestra and its music among children and families.  It is held every Sunday at 4pm, and runs for several months.