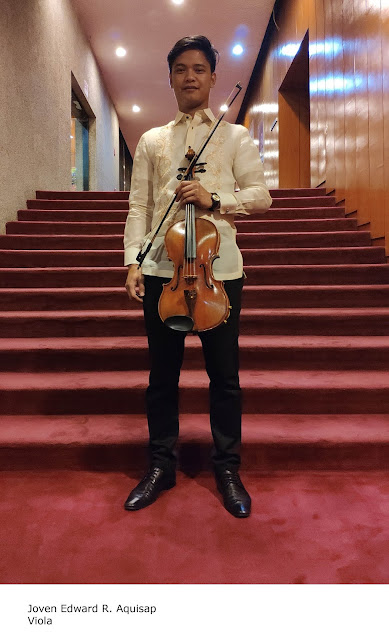 THE PPO Instrument Petting Zoo continues with its live online program as it features viola player Joven Edward R. Aquisap on Sunday, September 6, at 4pm via the PPO Facebook page.

For his instrument petting zoo session, Joven will talk about the viola and demonstrate how it is played. He will also perform classical pieces suited for the said instrument.

Joven Edward R. Aquisap started his first lesson in violin at the age of 7 in Casa San Miguel in Zambales where he grew up, and developed his talent in music under the tutelage of renowned pedagogue, Alfonso Coke Bolipata. Upon exploring his interests in other string instruments, he shifted to viola.

A recipient of the Santo Domingo Scholarship through the UST Symphony Orchestra, he finished his Bachelor's degree in Music, Major in Viola from the University of Santo Tomas, under Mr. Joy Allan dela Cruz.

Joven has performed in different countries such as Austria, Belgium, China, Czech Republic, France, Germany, Hong Kong, India, Indonesia, Japan, Portugal, South Korea, Spain, Switzerland, Taiwan, Thailand, USA, and Vatican City. He has also performed in some prestigious music festivals such as Young Euro Classics at Konzerthaus in Berlin; Luzern Music Festival at Luzern, Switzerland; and the Tianjin Children's Culture Festival in China. He has also performed with the Philippine Philharmonic Orchestra in June 2016 as a casual member at Carnegie Hall in New York.

He joined the Philippine Philharmonic Orchestra in September 2019.

The PPO Instrument Petting Zoo is a project of the Cultural Center of the Philippines and the Philippine Philharmonic Orchestra. It aims to promote appreciation for musical instruments of the orchestra and its music among children and families. It is held every Sunday at 4pm, and runs for several months.